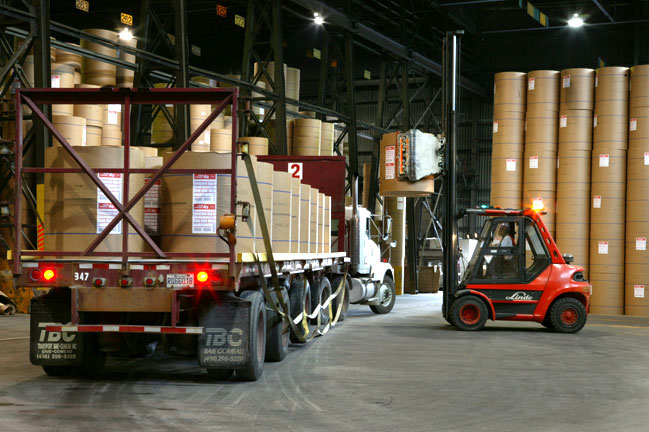 The restructured AbitibiBowater has less emphasis on newsprint

Calling itself a transformed company, AbitibiBowater has completed its reorganization and has emerged from creditor protection under the Companies’ Creditors Protection Act in Canada and chapter 11 of the U.S. Bankruptcy Code.

Calling itself a transformed company, AbitibiBowater has completed its reorganization and has emerged from creditor protection under the Companies’ Creditors Protection Act in Canada and chapter 11 of the U.S. Bankruptcy Code.

“Through our restructuring efforts, we have transformed this organization and given AbitibiBowater a new future – one driven by a company-wide commitment to profitability and sustainability,” stated David J. Paterson, president and CEO. “By strengthening our competitiveness and dramatically improving our financial position, AbitibiBowater has become one of the lowest cost forest products companies in North America. We are now a leaner, more flexible organization with a balanced product portfolio, better able to create value for our stakeholders while responding to the challenges of a tough industry with ongoing market volatility.”

According to the company, emergence from creditor protection represents the culmination of efforts that were undertaken shortly after the combination of Abitibi-Consolidated Inc. and Bowater Incorporated. Since 2007, the company has restructured itself both financially and operationally in a way that has dramatically lowered its breakeven point.

AbitibiBowater has streamlined its asset profile to top-performing facilities, closing or idling 3.4 million tonnes of paper capacity on an annual basis. This represents capacity reductions of 41% for newsprint and 32% for commercial printing papers. Wood products capacity was reduced by 21% over the same period.

The company has balanced its portfolio of products, reducing exposure to any one grade. New production capacities on an annual basis are – newsprint: 3.3 million tonnes, commercial printing papers: 2.5 million tonnes, pulp: 1.1 million tonnes and wood products: 2.2 billion board feet.

As well, AbitibiBowater state it has developed a flexible mill portfolio with a mix of U.S., Canadian and international mills located strategically to support low-cost, on-time delivery and providing a natural currency hedge as well as the ability to adapt to changing market dynamics.

The company has sold non-core assets and land holdings for total aggregate proceeds of over $940 million.

The restructured entity has reduced its debt burden significantly, and eliminated $880 million of annual fixed costs, from $1,353 million to $473 million. In addition, AbitibiBowater estimate it has realized more than $375 million in annualized synergies from manufacturing efficiencies and SG&A reductions as well as procurement and logistics initiatives.

The papermaker recently entered into agreements with provincial authorities in Ontario and Quebec, reducing annual pension fund contributions by approximately $200 million. These reductions have been made while registered pension plans continue to pay 100% of obligations to retirees and beneficiaries. The company will gradually move towards normalized solvency funding over a 10-year period.

“The restructuring process has tested the strength of our relations with our employees, unions, business partners and the communities where we live and do business. We will work hard to renew positive relationships and build goodwill through a commitment to be profitable as well as environmentally and socially responsible,” said Pierre Rougeau, executive vice-president, operations and sales.

On or about December 17, 2010, the company will make certain initial distributions to unsecured creditors in the form of new shares of AbitibiBowater common stock in payment of allowed creditor claims.