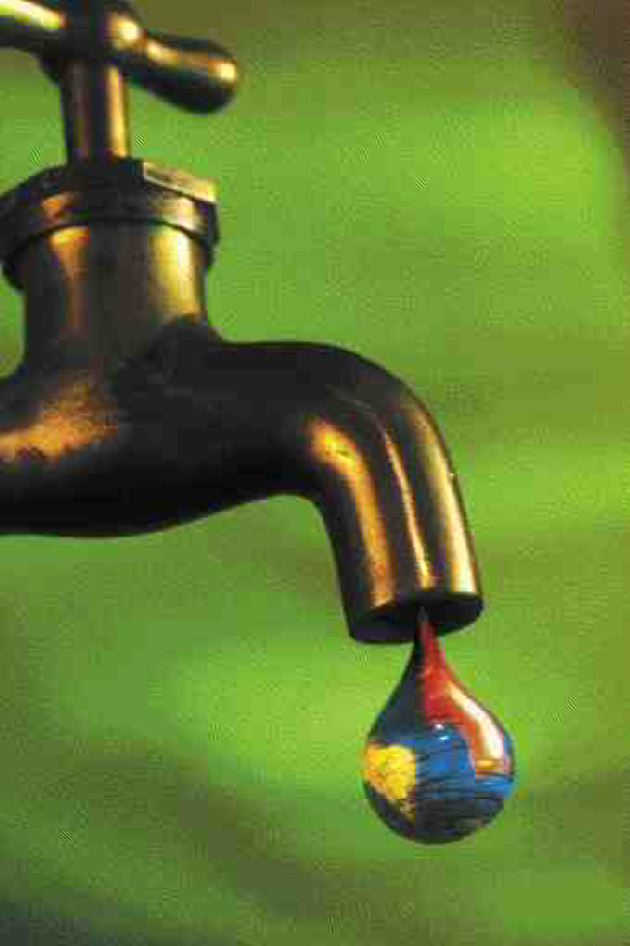 Water reduction is fast becoming the next looming environmental issue, one that touches not only the Canadian industry, but also other global manufacturing sectors that rely on water to produce a prod…

Water reduction is fast becoming the next looming environmental issue, one that touches not only the Canadian industry, but also other global manufacturing sectors that rely on water to produce a product. There is growing unease among the public that large industrial concerns — which use up to 30% of the planet’s freshwater — should be more vigilant about its consumption in the manufacturing process. Simply stated, their argument can be boiled down to this: the planet’s freshwater supply is not limitless.

With precisely that goal in mind, the federal government launched a Network of Centres of Excellence, or NCE, last October, devoted to clean water resources. The Canadian Water Network, based at University of Waterloo, will bring together 175 researchers from industry, academia and government to discuss the latest ideas on groundwater and surface water research.

Even so, as compelling as the idea of water reduction is, it is not easily put into practice, particularly when one considers the necessity of water in current manufacturing methods. It’s not a matter of turning off the tap to a trickle, so to speak. Water reduction, or as it is called, progressive system closure, is a complex and time-consuming process that forms part of a company’s environment-management program.

It is linked to energy management, contaminant separation, chemical recovery and regeneration and materials engineering. Simply stated, it’s a tricky balance between chemicals, water, energy and fibre, and how best to use (and recover and re-use) these while keeping an eye on community relations. “We call it progressive system closure, because one does it progressively, in stages,” says Ron Voss, program manager, environment, for Paprican in Pointe Claire, QC.

Paprican, which has been operating a system-closure program since 1996, offers its services to Canadian member companies. The research institute promotes system closure as part of a long-term environmental strategy. Typically, such a plan takes at least five years to fully implement. As well, it emphasizes developing strategies and technologies that mills can progressively incorporate into existing (even fairly older) installations, while maintaining or improving process efficiency and product quality.

Canada has a long history with progressive closure, from the Tomlinson recovery furnace in 1934, to the Rapson-Reeve process in the late 1970s, to advanced technologies and dynamic modelling in the 1990s. Even though no kraft mills are currently operating in closed-cycle mode, two bleached chemi-thermo-mechanical pulp (BCTMP) mills have been designed to operate without any liquid effluent: Millar Western Forest Products Ltd.’s mill in Meadow Lake, SK., a 300 000-air-dried tonne/year (adt/y) mill that started up as the world’s first successful zero-effluent bleached market pulp mill in 1992; and Louisiana-Pacific Canada Ltd.’s 160 000-adt/y mill in Chetwynd, BC, which LP shut down in April 2001 until it finds a new buyer.

In a sense, LP’s pulp mill was the first to employ zero-effluent technology in May 1991. It was a newly developed freeze crystallization process as the initial concentration stage, followed by two effect evaporators to treat the pulp mill effluent. However, the technology was not scalable, and the mill converted to a technology similar to Meadow Lake’s, namely, evaporation technology.

These two cases are not in isolation, and there have been concerted efforts to reduce water use since the 1960s, and most notably since the early 1990s — when Canadian mills started to assiduously implement water-reduction strategies as part of their environmental efforts. The pulp and paper industry spent more than $5-billion on environmentally related upgrades, including on secondary wastewater-treatment systems. Some of these upgrades further advanced system closure (for example, improved pulping, O2 delignification and new washing systems).

Part of these efforts have led Canadian mills to slash water consumption, on average, by more than 30% since 1989 — to 70 m3/tonne in 1999. “The use of water has dropped dramatically as mills implement practices, technologies and processes to progressively recover and re-use water and chemicals,” says Forest Products Association of Canada in its 2000-2001 Environmental Report.

Money is one reason: freshwater costs between US$30 and US$100 a 1000 m3. And while cost is a major reason to reduce the amount of freshwater entering and exiting mills, it is not the only driving force, say Paprican scientists Roxar Thompson and Talat Mahmood in a chapter published in the second edition of Water Use Reduction in the Pulp and Paper Industry (December 2001). “Other justifications are limited water supply, limited effluent-treatment systems, environmental discharge regulations and community relations. Water reduction also often decreases fibre and chemical losses and provides energy savings,” the authors write.

In short, it’s a prudent economic move to reduce over-all water consumption, particularly as part of an upgrade or modernization program. “Water reduction is a good business decision,” says Eric Hall, a professor of civil engineering whose research area is wastewater management. (He’s also one of the researchers working for the Canadian Water Network, in NCE.) “If mills take in water and use it, and then discharge it as wastewater, they have to treat it — and that’s expensive.”

One can develop a simple line of reasoning: less wastewater equals lower chemical costs. As an added incentive, mills that discharge less effluent into rivers and streams, are prone to, as Hall puts it, “fewer environmental discharges.” Or put another way, it leads to fewer possibilities of upsets.

Newer mills have many advantages, including having incorporated current engineering practices and newer technologies. But that does not mean an older mill is left without any options.

“There is a myth that water-reduction is very expensive and you need to install very expensive technologies,” says Mahmood, a scientist for Paprican’s environment group. “But there is a lot one could do by better management.”

He cited an example that one mill significantly reduced its water consumption by merely connecting an unused storage tank in parallel to the existing white-water storage tank. Because of the increased storage capacity, the mill avoided white-water overflow. “This strategy significantly reduced water consumption at a minor cost,” Mahmood noted (see sidebar, Mapping Water Use).

A water map is a good start, says Jean-Nol Cloutier, research engineer, engineering development and technology transfer for Paprican. Mills should start with a water balance, which tries to match water intake with discharge. “If it’s within 15 to 20%, we’re happy,” Cloutier notes. “Then, we prepare a water-reduction program, starting with quick hits. Paprican offers tools and support to reduce the risk of implementation.”

Afterward, mills can look at dynamic modelling and the use of process control technologies to optimize water use. Other scenarios include: recycling chemicals and fibre, using contaminated water in certain parts of the mill where freshwater is not critical to product quality and looking to advanced technologies like ion-exchange ultrafiltration (See sidebar, One for the Fish), and reverse osmosis for the purification of effluent streams before recycling back to the mill.

Although this is a long (and somewhat expensive) process, typically lasting five years, it has some noted benefits. “One of the advantages of this exercise is that mills find out all kinds of processes that are not operating optimally,” says Michael Paleologou, group leader for the chemical pulping program at Paprican. “Before you go closed cycle, you better know where you stand.”

To be sure, there are enough compelling reasons to start a water-reduction program.

And the industry, it seems, is starting to once again take an interest in water reduction. For example, Paprican is working with five mills in various stages of system closure. “The
mills have expanded production in the last 20 years, and have reached the limits of their effluent-treatment systems,” Paleologou notes. When a mill inches closer to the limit of its effluent-treatment capacity, it looks seriously at ways other than increasing capacity to both reduce costs and meet standards.

One of the mills that Paprican is working closely with is Tembec Inc.’s bleached kraft mill in Skookumchuck, BC, near the Alberta border. It dates to 1968, and a major rebuild was done in 1995-96.

The mill draws water from the Kootenay River, which is low flow and glacier-fed. To meet provincial environmental regulations, the mill installed a colour clarifier between 1993 and 1994 — a tertiary effluent treatment, which it subsequently found expensive to operate. Since it had a long-standing relationship with Paprican, it asked them for help. “We were following the work going on with Mike Paleologou, and it seemed like a good fit for us,” explains Bruce Burns, director of environment for the mill. “We also wanted to see what we could do without throwing away the bleach plant.”

It hasn’t. Since then, it has invested about $3-million on three projects related to water reduction. “It is money well spent,” Burns points out. “Our effluent has dropped between 5 and 10 m3/tonne. And on a good day, effluent flow can drop to 40 m3/tonne, or even to the low 30s.”

That stands in sharp contrast to the industry average for bleached kraft mills of 95-m3/tonne, reports Paprican in a toxicity survey of 28 mills (13 of them kraft) that it conducted in 2001.

As for further reductions, there are some concerns, Burns notes. “We’re nervous about going lower, because we’re worried that if we do, we won’t be able to meet toxicity levels without taking other measures like effluent recycle.” Meeting regulations is undeniably important, not only because of government guidelines, but because of community relations. “We understand the community’s point of view,” he says. “It’s an important part of the way we operate. After all, the river looks better blue than black.”

One concern that mills have in progressively moving to closed systems is that the water will contain higher concentrations of contaminants like BOD5, COD and TSS, and thus exceed toxicity levels set out by provincial governments. “That’s a disincentive to using less water,” Voss of Paprican points out. “It’s not only a case of reducing water. You’re taking some materials out of the effluent.”

Or closing the loop could raise the temperature. “All of a sudden, you realize that you have to put in a cooling tower,” Voss said.

As well, when a mill starts to use less water, it typically results in other problems. For example, retention aids tend to become less effective. “When you use less water, the dissolved and colloidal substances (DCS) in recirculating white-water increase, thus impairing the performance of retention aids,” Paprican’s Mahmood says. “That is a concern for papermakers, but there are some proposed solutions in the marketplace.”

To be sure, water reduction requires patience, perseverance and a good strategy. It requires using the latest tools and technologies, including water maps, mass and energy balances and life-cycle analysis. Canadian mills, on average, have advanced far in water reduction in the last five years.

Still, the complete elimination of effluent is not always the best choice, particularly for older mills, Paleologou says. “At the end of the day, the goal is not to necessarily go to zero effluent, but to do a life-cycle analysis to know where to stop.”

Perry J. Greenbaum is an award-winning business and technology writer. He can be reached at pgreenbaum@businessinformationgroup.ca.