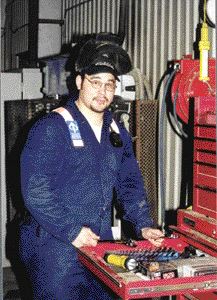 There’s been a sea change of understanding in the resource industry in Canada as companies come to appreciate the need for a return on investment to the aboriginal communities adjacent to their operations.

While this return has always been a given for non-aboriginal communities in the southern parts of the country, with taxes paid, local people hired and industry dollars spent in the community, in the north there was a different philosophy.

“Everything used to be fly in and fly out,” said Doug Willy, director of Aboriginal Business Development for Alberta-Pacific Forest Industries Inc. “There was a remote site, or workers from the south would be hired to go in and do their job during the winter period freeze up and then be gone. Well, that isn’t happening anymore.”

It may be a case of these communities saying ‘Hey, we want a piece of the action,’ but it’s probably more than that. There is a sense of corporate social responsibility, and a sense that it’s just good business to build strong ties with the communities around which the company will operate.

There are about 45,000 Aboriginal people living in or around Al-Pac’s Forest Management Area. After extensive consultation with the Metis, Cree and Dene in the region, it became understood that aboriginal communities wanted some input into how the forest resource was developed and some benefit from the pulp mill operation to their members, said Willy.

Al-Pac saw it could meet those requirements by concentrating on four key areas–economic development, capacity building, education and employment, and continued consultation. Al-Pac’s strong commitment to its goals in these areas has resulted in a number of successes over the past few years.

Sandra Cardinal is a member and resident of the Kikino Metis Settlement, located about an hour’s drive east of the mill site. She was hired by Al-Pac as the aboriginal affairs co-ordinator seven years ago and is now a business unit leader, keeping the aboriginal business plan top of mind in the company consciousness.

Aboriginal people are no different than any other population in that they want to live in vibrant, healthy communities, she said. That means they want sustainable employment for their residents, opportunities in education and training for their children, and respect for their values and ideals.

One of the most important lessons that Al-Pac has learned over time is that each community within its FMA will achieve its goals in ways that make sense to them. Whether it be a traditional horse logging operation in Kikino or a traditional land use study in Wabasca, the initiatives Al-Pac undertakes are community-driven.

It’s also important to Al-Pac to leave something in the community that isn’t totally dependent on the forest industry. If Al-Pac trains a power engineer, water treatment specialist, welder or pipefitter, that expertise remains in the community regardless of what happens to the company. Similarly, if it helps to establish independent companies, like Log Technogies Inc, a house building operation in Janvier that creates employment and homes for local residents, then the community is forever better off.

Cardinal knows Al-Pac’s commitment to the aboriginal community is real, because she’s measured it with the PAR program created by the Canadian Council for Aboriginal Business (CCAB). Similar to an ISO designation, PAR [Progressive Aboriginal Relations] evaluates a company’s achievements in the areas of employment, business development, individual capacity development and community relations. It designates a bronze, silver or gold hallmark to the company depending on the commitment demonstrated.

After a number of self-audits where it gathered all the information on company activities in the aboriginal community, and identified gaps in their program, Al-Pac is ready for the assessment by the National Quality Institute. It is confident the organization will do well, though we won’t know how well until a jury takes a final look to ensure that standards are being met. CCAB will announce the result sometime in the new year.