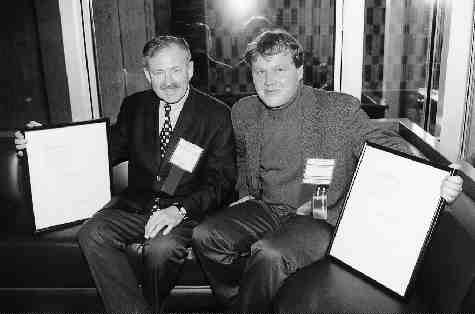 FOR PAPER GRADES with the highest quality surfaces, soft calenders with more than the usual two nips are required despite the application of high temperatures and pressures. This, said Mark Sorenson, …

FOR PAPER GRADES with the highest quality surfaces, soft calenders with more than the usual two nips are required despite the application of high temperatures and pressures. This, said Mark Sorenson, Ksters Beloit LLC, increases the capital cost and energy consumption of soft calenders using the traditional single-nip design and makes them less commercially attractive than a multi-roll system or supercalender (SC).

Sorenson spoke at a Paper Machine Technology Committee-sponsored session on Friday morning of PaperWeek. Calendering, reeling and winding were the topics covered in the session chaired by M. Soucy, Dry-Con.

He said the new technology avoids all previously uncontrollable deformities of the nipped rolls, which cause profile defects. As well, it avoids the shear stress transfer through the paper web in the nip which gives the paper higher tensile strength and extends the life of the roll covers.

The well-established Calcoil has taken a step further in its evolution since it was introduced over 13 years ago. It now uses a near-sinusoidal continuous waveform in the induction coils. As a result, the power electronics and the coil itself are smaller and more efficient. The output power density is higher and less cooling is required for the power modules.

The power modules use integrated gate bipolar transistor switches to produce the near-sine wave whose amplitude varies as a function of the operating frequency allowing the output power to be controlled smoothly.

A feature of the power modules is that they operate as nodes on a local operating network, communicating with the CDWeb Manager over a single network cable for every subnet of individual power modules. This reduces the amount of cabling required and installation time. The CW’s output power is 4.5 kW per 75-mm (3-in.) zone with a CD power density of 60 kW/m (18 kW/ft). This is a 13% increase in power over the existing analog modules.

The Calcoil CW beam is now about 46% smaller in cross-sectional area and 15% lighter than the analog design. Schigas said the Calcoil CW requires half the amount of space on the paper machine as previous technology making it ideal for applications on SC machines and the new generation of multi-nip soft calenders.

He described the use of an on-line numerical technique called synchronous time averaging (STA) analysis to isolate calender stack vibration to a specific roll. He said the technique is used on paper machines and is now being applied to SCs with filled and polymer covered rolls. STA is being used to tell mills to regrind problem rolls at the right time.

Sensodec is currently investigating the detection of loose paper by such a system. Rautiainen said such pieces of paper stuck to a roll can raise the temperature of a polymer cover at the point they are stuck. If left unattended, they can cause permanent damage to the cover.

The machine, installed in 1982, was designed to produce 28- to 36-g/m2 directory paper using a stone groundwood/softwood kraft furnish. There were no quality problems reported until customers started to require rolls with diameters over 45 in. and crepe wrinkles and bursts appeared. The demand for more deinked pulp in the sheet caused similar problems in rolls smaller than 45 in. As well, a radius of up to 2 in. of paper was being left on the bottom of the reel to reduce pressroom problems — a 2.5% loss of production.

The steps taken to resolve the problem included tungsten carbide coating on the winders’ front drum and modernizing the drives, making only one set at the reel, increasing the kraft pulp content of the sheet and trials with different combinations of reeling and winding parameters. These and other actions helped with the smaller-diameter shipping roll but never resolved the problem.

After weighing up the objectives, the mill finally decided to replace the existing reel with a Valmet OptiReel second-generation reel and the winder with a WinBelt bed winder.

The new reel is designed to overcome the problems of a conventional reel that Marchica outlined as: nip control, CD nip uniformity and the lack of a centre torque-derived winding force tension. The new reel is configured like a conventional reel except that the primary arms are much heavier-duty, have anti-friction spool carriages and can wind up to a 60-in. diameter before transferring to the secondary arm carriages.

The two machines were installed in January 1998. The mill reports no paper losses at the bottom of the parent roll or burst and crepe wrinkle problems. As well, parent roll diameters have increased to 126 in.

The technology grew out of a request to supply a winding system to Sappi’s ***Triple Star*** project at Gratkorn (formerly KNP Leykam) in Europe. The mill is said to be the world’s largest producer of woodfree coated papers at 470 000 t/y.

Beisswanger said the heart of the Sirius system is the SensoNip control system. Compared with the pope reel, the nip force is generated directly through the moving SensoRoll. The path-controlled parent roll movement compensates for roll growth.

The SensoRoll, with its adaptable SensoCover, forms the nip for the parent roll being created. A special surface design ensures good nip sealing and air dissipation. Air entrainment into the layer package and between the SensoRoll and the paper roll is prevented.

Winners of the Douglas Atack Award conferred for the best paper presented at the mechanical pulping session during PaperWeek were Goran Dahlqvist (left) and Kjell Kure.