Apr. 3, 2018 - At PaperWeek Canada 2018 in Montreal, Que., I attended a reliability session on February 7; two of the presentations were given by J.D. Irving employees on how they improved reliability in their paper mill in Saint John, N.B. There has been a focus on fostering a sustainable reliability process over the last several years, which has had an impressive payback. The first of these presentations was given by Tony Bass and Sean McKinley, both lubrication technicians at the mill.

How Canadian mill companies are working to eliminate unscheduled downtime

Before the improvement process began, the four-year average for unscheduled downtime for bearing failures at this mill, which manufactures supercalendered paper on two paper machines, was 174 hours per year from 2007 to 2011, or 2 per cent of the time. The most-often cited cause of bearing failures is improper lubrication. One of the first steps the mill took was investing in training on proper lubrication theory and procedures, provided by the International Council for Machinery Lubrication (ICML). Today, every lubrication technician at the mill is required to be certified as a Level II Machine Lubrication Technician in accordance with ISO 18436. This allows them to have better understanding of the importance of lubrication, and how to detect potential problems before they result in equipment breakdown.

Following their training, Bass and McKinley became involved in developing a proactive approach to help prevent bearing failures, getting maintenance staff more engaged in the overall journey to better reliability. They implemented a 5S project to better organize their lube room, reducing clutter and making equipment and supplies easier to locate, see Image 1 and 2.

Better communication between departments and the use of vibration and ultrasound tools for feedback and monitoring is part of the proactive approach. Using the mill’s process historian to monitor filters and tank levels also helps keep the lubrication department on top of the condition of their equipment.

The results show the approach is working well. The current four-year average annual downtime for bearing failure is only 44 hours. Bass and McKinley’s enthusiastic presentation showed their sense of pride in having accomplished this 75 per cent improvement since 2011.

The second presentation from Irving employees was given by four members of the mill’s reliability team led by Nancy Vautour, a 16-year veteran at the mill who is currently reliability superintendent. The focus of this presentation was how they ingrain reliability in the mill culture and incorporate it in their day-to-day activities, using a standardized process that defines roles and responsibilities across the mill’s two paper machines and thermomechanical pulping (TMP) plant.

Two types of management tools that make this possible are analytical tools and communication tools. For every downtime event greater than two hours, a Downtime Incident Report is written and is due by 7:45 am the next day for review at the daily managers’ meeting. If the downtime lasts more than four hours, a root cause analysis is carried out, with a report deadline of one week. All reports are stored in the mill’s computerized maintenance management system (CMMS) and links are accessible on the mill’s intranet. Follow-up activities developed from these reports are also tracked on the system. Keeping detailed equipment and event history in a standardized format that is easy to access is important for root cause analysis and job continuity for new employees, they explained.

The maintenance philosophy
The next speaker was François Tremblay, paper machine maintenance superintendent at Domtar’s Windsor, Que., mill, who discussed the mill’s maintenance strategy. He gave some historical perspective to the development of maintenance philosophy. From the 1930s to the 1970s, maintenance was in reactive mode, fixing things only when they broke down. From the 1970s to the 1990s, preventive maintenance was introduced (think regular oil changes and tune-ups to your car), followed by predictive maintenance until about 2010, where condition monitoring is used to determine when maintenance should be performed. Since 2010, the trend is to aim for precision maintenance, where everything is tuned to run perfectly, using tools such as laser alignment, vibration monitoring and high-quality balancing of rotating parts, along with a system to apply standards and requirements successfully.

Precision maintenance was also the subject of a morning session at PaperWeek, presented by Ian McKinnon of Reliability Solutions.

Tremblay used the High Performance Organization Wheel to illustrate where he sees the mill’s current maintenance philosophy (see below). Reactive maintenance is the outside circle, labelled Reactive Circle of Despair: breakdown, panic and fix. The middle circle is Continuous Improvement: plan, do, check and act. Finally, the inner circle is the Proactive Circle – report, act and audit – which is the goal of the Windsor mill. 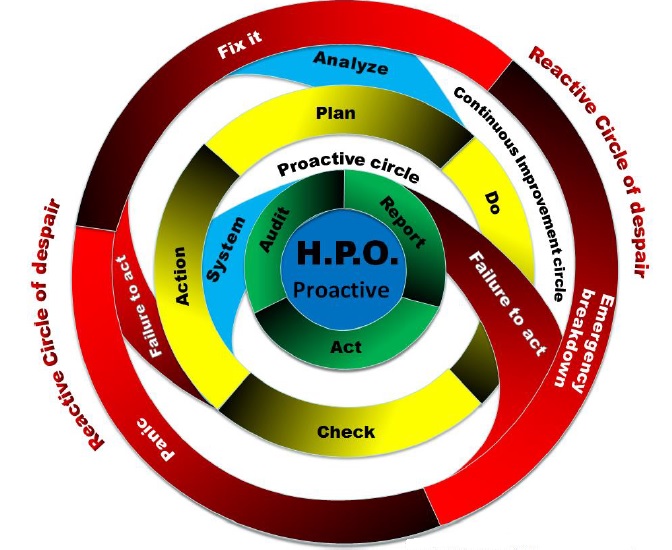 Tremblay stated that improving reliability through better maintenance is largely based on people — about 80 per cent of your success comes from the people and processes and only 20 per cent is about the technology, such as techniques and gadgets. When the Windsor mill’s planning and scheduling processes were assessed by IDCON reliability consultants, some of the key opportunities identified included reviewing the workflow, better defining roles and responsibilities, and improving the effectiveness of their meetings. A cross-functional work group of 11 people from operations and maintenance was formed to deploy the action plan, and the end result was a better defined agenda for daily meetings, as well as a more detailed workflow for weekly work planning, shutdown work planning and common planning activities. The key benefits include improved communication and teamwork between operations and maintenance, less emergency work and more proactive work, and less rework following shutdowns, he said.

Information at their fingertips
One of the subjects Tremblay also touched on was the ongoing loss of expertise due to retirement. The Windsor mill turned 30 years old in 2017, and since 2009 there have been 257 retirements — a 48 per cent turnover. Another speaker, Steve Crotty of Andritz Pulp & Paper, spoke about how Industry 4.0 may have some tools to help with this.

Ever since the industry started using data historians about 20 years ago, various applications have been developed to help use this repository of Big Data for analysis, troubleshooting and advanced control. Fairly new are applications that help target and address reliability such as augmented reality. 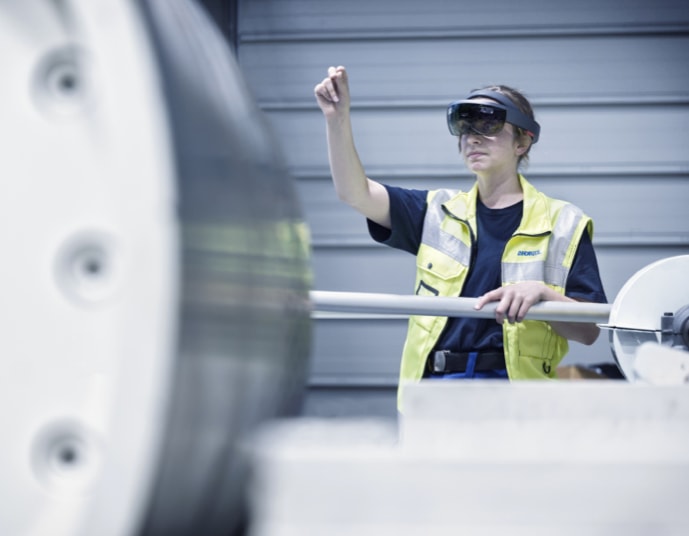 An example of augmented reality is the heads-up display – dashboard data projected on the windscreen – now available in several car models. This concept has been developed further for applications in industrial plants. By using GPS data or a QR code along with Wi-Fi access, plant personnel can access information on industrial equipment, projected just above their line of vision when wearing a device like smartglasses or through a smartphone or tablet. The data can range from live or historical operating data, to maintenance records, engineering drawings, lockout procedures and even holographic models used for equipment and machine training. Users can interact with the image using their fingers, just as they would on a touchscreen tablet. Development of this technology has been driven by the concept of delivering information directly where it’s needed to provide a highly efficient workplace.

Andritz has sold this concept to several mills to date and believes it will become standard in new mills, but they say it is easy to build for current mills as well. The advantages of having immediate access to equipment information are obvious, primarily saving huge amounts of time compared to going back to an office to look up the same information. In a survey of 12 mills that have installed the Andritz Augmented Reality application in their mills, annual savings ranging from 650,000 to 3.6 million euros per mill have been quoted. The company recently added remote conferencing capability to the Augmented Reality application so users can connect to an Andritz expert in Austria, Finland, Brazil or the United States while they are in their own mill next to the machine. Both the expert and mill personnel can view the data together, speeding up the troubleshooting, training and optimization processes.

As Andritz puts it: “Digital disruptions play a major role in the industrial landscape nowadays. Thanks to the Industrial Internet of Things, a highly expansive field of innovation has evolved and will change the industrial world significantly.”

This article was originally published in the Spring 2018 issue of Pulp & Paper Canada.