News
Molecular Modelling Symposium: the Practical Side of Theory 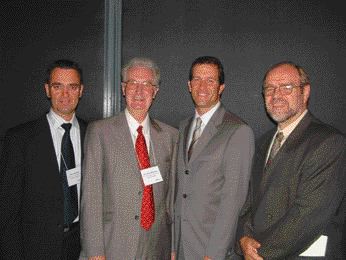 From first sight of the participants of the First Applied Pulp & Paper Molecular Modeling Symposium, held at McGill University in Montreal during August, there’s hope for the future of the pulp an…

From first sight of the participants of the First Applied Pulp & Paper Molecular Modeling Symposium, held at McGill University in Montreal during August, there’s hope for the future of the pulp and paper industry. Some of the best and brightest young men and women, enthusiastic about their chosen specialties, mingling with their more experienced scientists, experts and professors, and all looking forward to intense discussions of new ideas generated by the presentations.

According to the co-chairs, Professors. Theo van de Ven and M.A. (Tony) Whitehead, the purpose of the conference was to:

Stimulate the use of molecular modelling in the pulp and paper industry;

Lead to the design of new molecules for the industry; and

Provide a clear understanding of the mechanisms needed to improve the efficiency of processes in the industry to give a more efficient, green and financially viable industry.

Judging by the calibre of the presentations and the heated discussions between sessions, this definitely seemed to be one of the keys to using the advanced technology needed to ensure the future of the industry.

How did it begin?

“I dreamt of this,” answered Roger Gaudreault, general manager of Cascades Canada Inc., R&D Centre and Norampac Inc., Technical and Development Centre, when asked that question. While doing his PhD at McGill University, Gaudreault realized how intertwined the theory and the practical aspect of proving the hypothesis were. “It is very important to support theoretical work with experiments, it is the theory that gives you the insight.” Modelling, he explained, was very important because it solves problems that cannot be solved in any other way since the experiments can be extremely expensive.

This led to the idea of organizing an event to bring the practical people together with the theoreticians, to discuss their different points of view. An additional incentive was to offer the enticement of presentations that included practical solutions for the pulp and paper industry. “For instance,” he explained, “carbon nanotubes were predicted on the computer before they were proven by experimentation.”

Gaudreault presented his idea of a symposium to his professors at McGill, Drs. Theo van de Ven (pulp and paper expert, especially in the field of wet end chemistry) and Dr. Whitehead (known for his pure theoretical work on molecular modelling). The symposium would be a world first and both professors were highly supportive. The planning began.

Dr. Whitehead concurred with the importance of theory and modelling. “You absolutely must know the theory behind the computer program,” he emphasized, “since the program will only do what it is asked to do.”

Andr Bourbonniere, chief risk officer for Oxycair (Whaddon Water Management) admitted that, although he was more involved with the practical aspects of the applications, he thought the conference was important for promoting further research of the pulp and paper industry.

“It’s not enough to just ask the question,” he said of the computer modelling. “You have to understand what’s behind the concepts that are being put forth and that’s what’s being provided here.”

In his introductory remarks, Marc-Andr Dpin, president and CEO of Norampac, spoke of the challenges facing the industry, including the problems with the fluctuating Canadian dollar and high energy costs. He listed the improvements that have recently taken place in the industry, including limiting dioxins, reducing sulphur based delignification process odours, upgrading waste water treatment and the reduction of acid-based paper yellowing. In much of the progress being made, he pointed out that much was dependent on the design of more efficient, reliable and cheaper molecules.

“Molecular modelling will be the one key tool for answering these challenges,” he stated.

What stood out at this conference was the number of young people, which van de Ven attributes to a new generation with new ideas, bringing a new image to pulp and paper research. “The scientific aspect of applying the computer programs to practical solutions appeals to the young,” said van de Ven with a smile. “Not all of them begin with a background in pulp and paper, so it is up to us to guide them in that direction.”

This year the participants numbered over 60 from places as far away as Finland and Tasmania. With the success and enthusiasm that was generated during these three days, it was evident that the next symposium, already being planned, would bring more.

According to Sue Stevenson and Manon Gagnon, who managed the administrative details of the symposium, a book containing all the technical papers will be published by the end of this year.

* Molecular Modelling of the Effect of Lignin Crosslinking on its Reactivity: L. Jurasek and D.S. Argyropoulos

* Use of Molecular Modelling to Understand Pitch Deposition and Interactions with Fixatives: K. Stack

* Gaining an Insight into the Interactions Leading to Wood Pitch Deposition through Correlations Between Theoretical and Experimental Results: D. Vercoe , K. Stack, A. Blackman and D. Richardson

* Molecular Simulation of Polymer Adhesion to Cellulose Surface by the Group Contribution Method of UNIFAC: B. Zhao, L. Bursztyn and R. Pelton

* First Principles Investigation on the Chemical Interactions of Water with the (10.4) Calcite Surface: A. Villegas-Jimnez, A. Mucci, J. Paquette and M. A. Whitehead

* Molecular Simulation of Phenylcarbalilation Reaction and Aggregation of Cellulose for Determination of Degree of Polymerization Distribution: N. L’Ecuyer, S. Robert and J. Bouchard