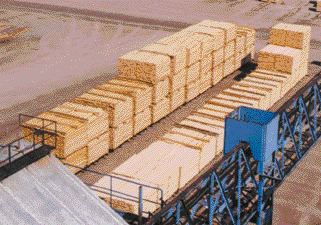 EDMONTON, AB — Despite volatile pulp and lumber markets, a strengthening Canadian dollar and the ongoing softwood lumber trade dispute, Millar Western improved its financial results for the fourth quarter and year ending December 31, 2003, compared to one year ago.

Lumber shipments improved by 20% in the fourth quarter and 21% year over year, due to strong demand and higher production levels at the Whitecourt and Boyle sawmills. While shipments were up, average net price per thousand board feet decreased by 16% year over year. Contributing to the lower average net price for the year were higher duty charges on softwood lumber shipments to the U.S. A charge of $11.9 million was incurred in 2003 relating to duties paid on all softwood lumber shipments to the U.S. between January 1, 2003, and December 31, 2003, compared to $2.9 million in the same period in 2002.

Pulp shipments improved by 3% in the fourth quarter and by 7% year over year, reflecting higher pulp production at the Whitecourt mill. As a result of continued strong demand for BCTMP in the world market, average pulp price per tonne improved by 10% from the prior year.

The idled assets amounted to $11.5 million US and include a paper machine, converting lines and a de-inking pulp mill.

The tissue paper machine and converting lines were previously owned by a trustee on behalf of GE Commercial & Industrial Finance.

The start-up of the tissue machine will be dictated by market demand. The converting lines, which are expected to start-up gradually later this year, will produce bathroom tissue and paper napkins.

SAINT-LEONARD, QC — Due to the low level of logs inventories, Unifort has announced a production curtailment at its Port-Cartier sawmill from April 5th to June 4th, 2004.

The sawmill will run only one shift of production per day as compared to the current schedule of two shifts daily. This production curtailment will reduce production by some 12.9 million board feet, which is 7% of the sawmill’s total estimated output for 2004. Approximately 30 employees will be affected by this temporary slowdown.

The company will also curtail production at its planning mill starting May 4, where 11 jobs will be affected.

VANCOUVER, BC – Western Pulp Inc. will be raising its price for northern bleached softwood kraft pulp in Europe and the United States.

HELSINKI, FINLAND — As a direct result of the Gaspesia project being on-hold, Metso Paper is prepared to make an approximately EUR 10-million reserve in the result for the first quarter of 2004.

In 2002, Metso Paper received an order for a rebuild of an on-line printing and writing supercalendered coated paper line from

Papiers Gaspsia in Chandler, QC. The rebuild was supposed to be completed in mid-2004, until Tembec withdrew from the project last month due to additional costs.

DELRAY BEACH, FL — The environmental campaign against Office Depot is over following the company’s announcement of a revised environmental policy, including phasing out the sale of products made from endangered forests.

Company officials said the five-year, $ 2.2 million US strategy is expected to help reduce the “environmental footprint” of the company’s forest and paper product suppliers while contributing to global biodiversity conservation.

DUNCAN, BC — Doman Industries Ltd. will resume operations at the Port Alice mill for at least 37 days, starting on April 5.

Last February, a majority of the holders of Doman’s unsecured notes decided that the pulp mill must be permanently shutdown or sold to a third party. The company is still looking for buyers to avoid a permanent closure.

MONTREAL, QC — Due to reduced supply and high prices of conifer saw logs, Domtar Inc. will reduce operations at its Chapleau, ON, sawmill to one shift.

This decision will take effect on April 30, 2004 and will affect approximately 64 employees for an undetermined period of time. The downtime will reduce the sawmill’s annual output by approximately 32.5 million board feet.

Domtar expects the reduced supply environment to continue into the foreseeable future throughout Northeastern Ontario.

The increases are expected to average approximately 6%. Net sales of Kimberly-Clark’s consumer tissue products in the U.S. amounted to more than $2 billion in 2003.

MONTREAL, QC — Newsprint consumption in the U.S. fell 3% in January. The decline was largely due to the 1.7% drop in consumption by daily newspapers, according to the Pulp and Paper Products Council.

Shipments from North American mills rose slightly compared to January 2003 at 0.6%, due to a 7.6% increase in North American exports. Though shipments to Western Europe were down in January, gains in deliveries to all other major overseas markets were registered. Shipments to North America declined close to 1%, due to a 2.6% drop of Canadian demand, whereas U.S. demand was flat.

Mill inventories increased by 34,000 tonnes from the preceding month, closing at 336,000 tonnes.

Mills operated at 92% capacity, up from 88% a year ago. Inventories held at North American mills and box plants totaled 2.6 million tonnes at the end of January — an increase of 157,000 tonnes over the previous month.

January marked the first month since December 2002 where North American kraft paper demand is growing, up 0.7% compared to January 2003. Production was lower than 2003 levels for the month, down 3.1%. As a result, producers operated at 84% capacity in January, down from 88% reached at the same month last year. Inventories increased by 2,000 tonnes compared to December, however they are down 21,000 tonnes compared to January 2003.

Boxboard demand in North America declined slightly last January, down 0.4%, while production remained unchanged compared to the same month last year. Mills operated at 84% capacity, a one-point decrease over the 85% registered in January 2003.

“FUR” THE LOVE OF MONEY

Between the 11th and 13th centuries, Russia’s monetary unit was the “credit currency”. It functioned like paper money, except that it was not paper. It was fur — worn-out fur unsuitable for use in garments, to be exact.

Back then, people would bring used furs to an authorized clerk who would affix a marker to the furs, which would then be used as currency.

The WTO said the U.S. International Trade Commission did not follow international trade rules when it decided to add punitive duties of 27% to Canadian imports of pine, spruce and fir boards, saying it posed a threat of injury to the U.S. industry.

A separate panel, formed under the North American Free Trade Agreement, ruled last March that the U.S. correctly calculated the tariff, rejecting the Canadian complaint. The NAFTA panel handling the case sent the anti-dumping component of the tariffs back for further review.

Canadian lumber producers and their U.S. counterparts are awaiting the results of NAFTA’s next ruling on whether subsidies given to Canadian lumber companies represent a threat to the U.S. sawmills.