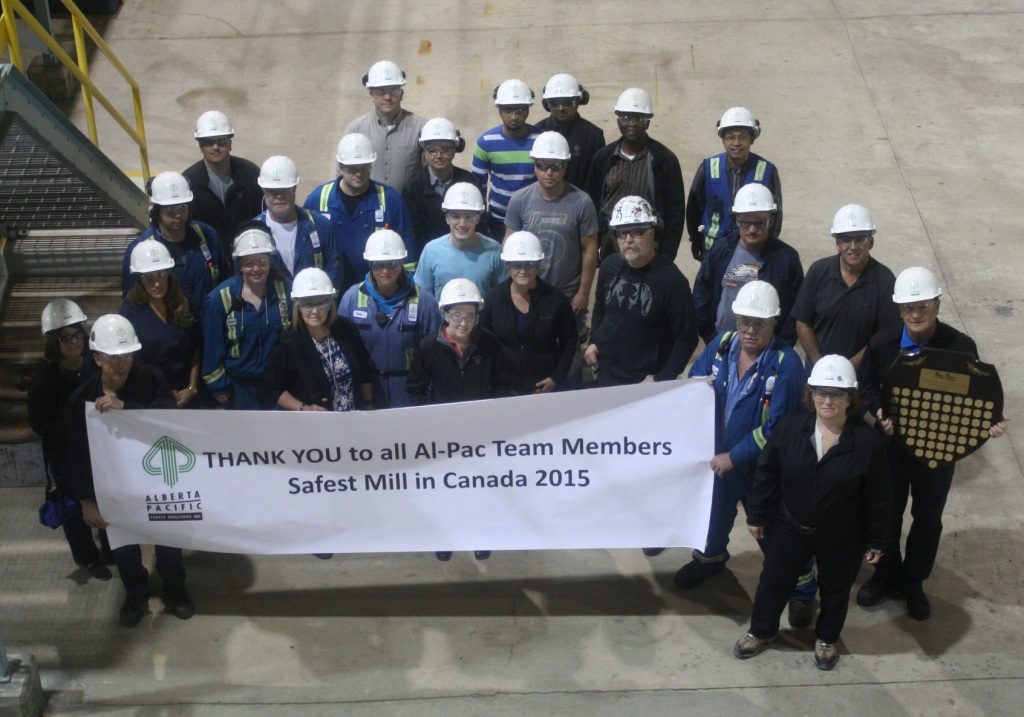 Al-Pac was the winner of Pulp & Paper Canada's 2015 Safest Mill in Canada contest.

Employees at Alberta-Pacific Forest Industries say they feel secure and hopeful again, after a few years of uncertainty. The mill transferred from one Japanese owner to another in 2015.

The Alberta-Pacific mill opened in 1993, a joint venture of Mitsubishi Corp. and Oji Paper. At the time, it was the largest single-line kraft mill in the world. It was also one of Mitsubishi’s largest ventures in North America. But in 2013, Mitsubishi decided to withdraw and began trying to sell the mill. The eventual buyer was Hokuetsu Kishu, one of the leading paper companies in Japan.

Hokuetsu Kishu has six mills in Japan, as well as operations in China and France.

“We regard Al-Pac as a very important platform to develop business opportunities in North America,” says Sam Terao, a corporate officer of Hokuetsu Kishu and chairman, president and CEO of Alberta-Pacific.

Al-Pac’s sales make up less than 20 per cent of Hokuetsu Kishu’s sales revenue, but account for almost one third of its profit.

Daryl Nichol, mill manager for Al-Pac, says in turn, that Hokuetsu Kishu has been “a breath of new life” for the northern Alberta mill.

With the new ownership, a change has been immediately evident, says Nichol.

Brent Rabik, Al-Pac’s business unit leader for business development and government affairs, says the company is working on the optimization of the current business, and continuing to invest in R&D.

“Being for sale for two years, things were very unsure,” Rabik recalls. Since the completion of the sale in Oct. 2015, he says, “there’s a sense of moving forward.”

Al-Pac employs 385 team members and, for most of the year, about 650 contractors. The company had $398 million in sales last year, producing 622,000 tonnes of pulp. Most is bleached hardwood kraft, and a small percentage is softwood kraft.

Al-Pac sells the majority of its output to North America (60 per cent), with the rest going to Asia. Nichol says the mill’s competitive advantage is the characteristics of its fibre: clean, consistent, uniform and white.

As well, Al-Pac is recognized as a green company; the mill holds FSC certification for its fibre supply.

Cal Dakin, woodlands manager, says the choice to pursue FSC certification was made in 2005, because the mill already followed sustainability practices that met the FSC criteria. “FSC validates what we do, it does not define it,” he comments.

Nichol says the mill’s woodyard at times holds one of the largest volumes of fibre in the world. Due to the fens, marshes and bogs on its forest management area, the mill harvests two-thirds of its fibre requirement from October to March when the ground is frozen. This also helps minimize impact on the environment.

Al-Pac has four hardwood chip piles, containing approximately 80,000 m3 of chips, and one softwood pile that typical contains 80,000 m3 to 100,000 m3 of fibre. Nichol estimates that at the peak of the mill’s log haul season there is approximately $40 million worth of fibre on site .

Nichol notes that Alberta-Pacific was the first North American “super mill.” It was considered a high throughput mill when it was built in the early ’90s, and has a lot of inherent design capacity. The mill was originally designed for 1500 tonnes per day with a stream rate of 1667 admt. It currently targets a 2100 admt stream rate with a daily target of 1900 admt.

The company installed a new wood room in 2007. It reduced the number of positions required to operate that area, however any team members displaced in the woodroom were provided opportunities in other areas of the mill.

The bleach washers, Nichol says, are some of the largest ever built in the world. They have a lot of capacity and are capable of washing 3000 t/d of pulp. Al-Pac’s conventional pulp machine drains and presses the pulp sheet to 50 per cent solids, which is then dried in a Flakt dryer (18 passes).

Al-Pac generates electricity for its own needs and is able to sell approximately 33 MW of renewable energy to the provincial grid. In addition, the mill can add another 13 MW with its natural gas turbine. The facility was designed with two high-pressure steam turbines (41 MW) to supply all mill power.

Al-Pac also undertook a bio-methanol project, creating methanol from stripper off gas. The project began in 2012. The equipment is running, but optimization work is ongoing. The methanol is not yet able to meet the standard necessary for sale to external customers, although the purity target has been achieved. Nichol says the methanol can offset costs for the mill if it is burned internally as a fuel.

The mill manager says the company continues to look for new opportunities, particularly bolt-on technologies, perhaps cellulose nanocrystal. Al-Pac is involved with the pilot CNC plant operated by Alberta Innovates Technology Futures. Other avenues of exploration are pulp as an additive for plastics, new pulp grades for tissue and toweling, transload facilities, and the use of waste ash in concrete and road building.

It’s about the people

At the time the mill was built, Nichol recalls, management wanted this mill to be different. There was an effort to develop self-directed, self-managed teams. “Our people are engaged, even to this day,” he comments. That attitude has carried over to safety and environmental concerns.

The mill received the Safest Mill in Canada award in 2011 and 2015 from Pulp & Paper Canada, and has “Partners in Injury Reduction” certification.

It has also been on the list of the Top 100 Employers in Canada for many years.

Safety is really part of each task, not “something else” that a team member also has to do, explains Nichol. All new team members get one to one-and-a-half days of safety training. He says there is a lot of communication from the company leadership about safety, and there’s been a lot of reinforcement this past year.

Reprinted from the September/October edition of Pulp & Paper Canada