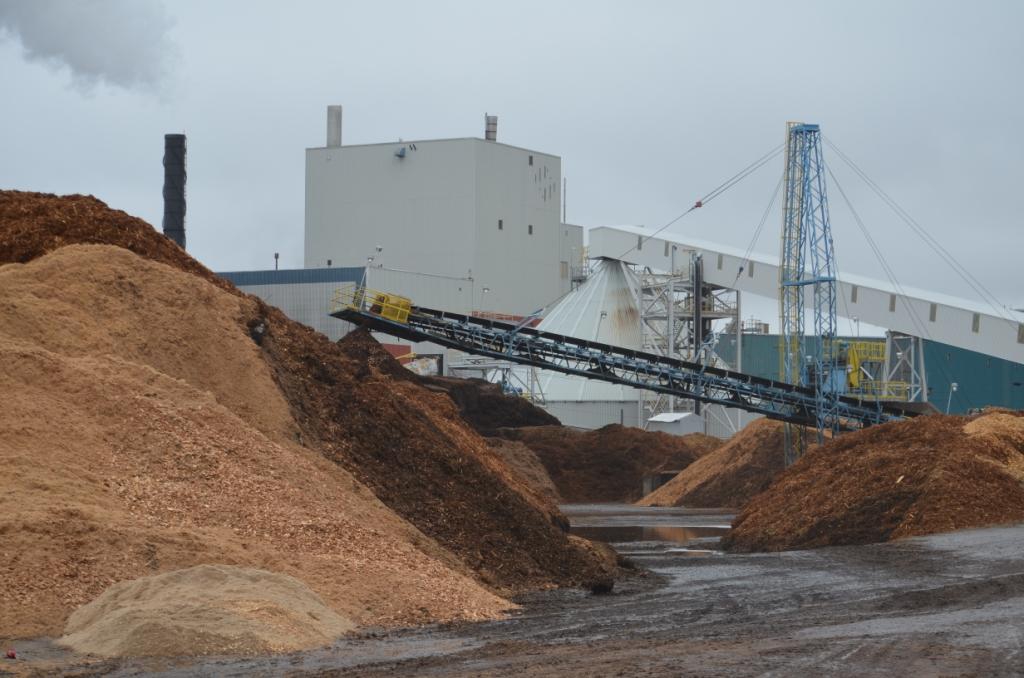 Even before the Government of Nova Scotia introduced its Renewable Energy Plan in April of 2010, Nova Scotia Power understood the opportunity that was in front of them in Point Tupper.
It was 2009 when the original idea to add a turbine for power generation was conceived, recognizing that the biomass boiler at the Point Tupper site had been under-utilized by the NewPage pulp and paper mill. A previous owner of the mill, Stora, had installed the system in 1983 as a way to burn excess bark and spruce budworm-killed wood.
The initial agreement negotiated with NewPage stated that Nova Scotia Power would absorb the entire capital cost of the project, pegged at $208 million, with NewPage providing the personnel to operate the facility.
But in 2011, amidst the continued decline for demand of paper products on a global scale, NewPage filed for creditor protection. The mill shut down in September, forcing NSP to re-evaluate the merits of the Point Tupper project without having the NewPage infrastructure in place.
After careful consideration the project was re-started independent of NewPage’s involvement. Shortly thereafter, the pulp and paper mill was sold to Pacific West Commercial Corp., and the facility was re-started in October of 2012 with only the supercalendared paper and thermomechanical pulp lines in operation.

Moving towards operation
The boiler potential and the need for firm, consistent renewables to meet the targets of the Renewable Energy Plan were driving the $208 million investment forward. Those concerns were then complimented by successful negotiations with the new tenant, operating the mill as Port Hawkesbury Paper, for both the sale of steam, and fuel management throughout the site.
The $208 million investment included three basic components. The single largest investment was the construction of the turbine hall and the installation of the turbine. The 150-tonne steam turbine was built by Mitsubishi Heavy Industries at its facility in Yokohama, Japan, and was delivered to the site in April of 2012.
A second truck dumper and chip silo were necessary for primary biomass handling, along with the associated conveyors and secondary infrastructure necessary.
There was also the need for a significant modification of the boiler. The boiler was originally designed for an output of 60 kg/sec of oil and gas, but only 40 kg/sec when using biomass. Upgrading the boiler to the desired 60 kg/sec output using biomass meant bigger drives for the ID fans, as well as reinforcement of the duct work to handle the higher air flows.
The 60 kg/sec output is equal to the 60 MW of power that NSP wants to be able to generate at capacity. According to NSP, 60 MW will provide the power needed for approximately 50,000 homes. However, there are also the demands of Port Hawkesbury Paper to take into account, which uses approximately 25 per cent of the produced power when the mill is operating at capacity. Overall, the entire power production represents as much as 3.5 per cent of the province’s power-generation needs.

Acquiring fibre
One of the biggest hurdles to meeting the desired output is the acquisition of fibre. Producing 60 MW on a consistent basis, and an estimated 350-gigawatt hours per year, means consuming up to 2,000 green tonnes of biomass per day and a total of up to 500,000 green tonnes per year.
“We actively buy bark from other sawmill producers,” says Jeff Campbell, plant manager for Nova Scotia Power at Point Tupper. “We also have woodland contractors that are out securing biomass for us, primarily from the seven counties surrounding our site.”
That’s not an easy task when considering the state of the forest industry in Nova Scotia. The combination of the recession and the weakening global demand for paper proved to be more than many contractors could survive.
“The demise of the CCAA with the paper mill (NewPage) turned out to be very challenging for the woods contractors,” Campbell stated. “There were a lot that went out of business during that period. So even with the paper mill starting back up and us shortly thereafter coming online, many of the contractors chose not to return to the wood harvesting industry. So the biggest challenge has been a combination of contractor availability and the overall decline in the forestry sector in the province.”
That has led Nova Scotia Power to look elsewhere for fibre, both for availability and for the best price point. In 2014, NSP imported approximately 55,000 green tonnes of bark from sawmill operations in Quebec. The bark was shipped by barge, which was then offloaded at the dock facility shared by NSP and Port Hawkesbury Paper.
“The choice to go to Quebec was primarily an economic one, as we do strive to find the lowest overall cost fuel supply,” Campbell says. “It was an attractive economic proposition for us.”
The price point that NSP offers to purchase biomass for has not changed since startup in 2013. And while there is not an overabundance of biomass currently in Nova Scotia, NSP has managed to keep its supply at the levels it set out to maintain.

Biomass fibre only
It has been speculated at various times throughout the past few years that NSP was supplementing its supply of biomass wood with higher-value logs that should actually be shipped to pulp and lumber producers.
But according to Campbell, the numbers just don’t add up: “There is a strong economic motivator for logs to go to the right buyer. The next closest competitor to biomass would be Grade Three Hardwood sawlogs, which commands a 30 per cent premium in the market. The highest quality Grade One hardwood sawlogs are worth three times as much as biomass.”
The operation has also been subject to a series of audits intended on, in part, ensuring that the company is using the right type of fibre for power generation.
“We have an extremely aggressive auditing program,” Campbell says. “We are regulated by the Department of Natural Resources, the Renewable Energy Standard, the Department of the Environment and the URAB (Nova Scotia Utility and Review Board). We meet all of our regulated requirements.”
NSP has also conducted extensive audits of its own in the first two years of operation. The company’s own team has conducted 132 audits, and two procurement managers have conducted an additional 230 inspections over and above, a sharp increase above the industry standard. To this point, there have been no significant findings of misallocated fibre.
Between the hauling and harvesting operations, it is estimated that approximately 200 jobs are partially or fully reliant on the fibre provided to NSP. That is complimented by 34 full-time Nova Scotia Power staff, as well as 10 full-time contract staff responsible for the fuel handling and wood yard.
The team at Point Tupper is still learning, refining the operation and finding efficiencies when possible. Nova Scotia Power officials have experience handling fuels like coal, oil, and natural gas, but not as much with biomass. That’s why operational leaders are working on taking an active role in the Canadian biomass industry, learning from industry experts from across the country and around the world.
So far, the success of the Point Tupper operation has provided a new example for successfully providing renewable, clean energy for thousands of homes and businesses throughout Nova Scotia.