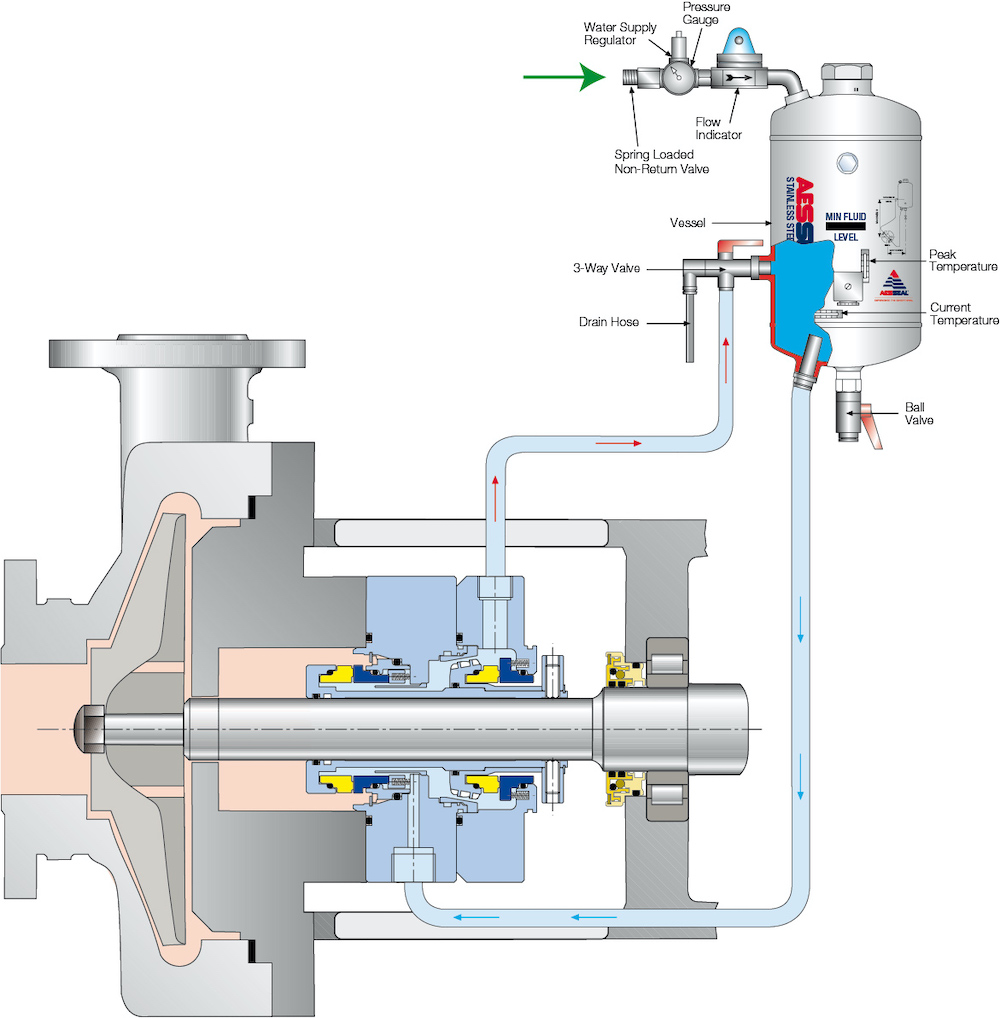 Businesses are expected to constantly improve their financial performance while adhering to federal and provincial environmental regulations, increased occupational health and safety requirements, escalating raw material and energy costs, and competition from lower-cost regions of the world.

Energy efficiency, water conservation, increased plant reliability and reduced CO2 equivalent emissions are high priorities for companies as they seek to minimize operational costs as well as maintain their reputation as an organization focused on sustainability.

Achieving these goals presents a particular challenge in the pulp and paper industry, where sealing water injection can result in up to eight litres of water per minute being injected into pumps and systems to flush and cool them. That water is then treated and discarded at the end of the process cycle.

Only 0.6 per cent of the world’s water is suitable for industrial use and human consumption. This water waste contributes in no small way to predictions in a 2015 UN report that global water demand will fall short by some 40 per cent in less than 15 years’ time. Billions of litres of water are wasted every year as a result of industrial processes such as sealing water injection.

Proactive businesses have found that auditing energy use in each link of the supply chain can eliminate water waste and reduce energy consumption. A mechanical seal energy audit is a simple way to review energy usage and identify solutions.

What is a seal energy audit?

Mechanical seals perform a simple but vital role – to prevent fluid leaking from the shaft region of pumps and other rotating equipment.

To function correctly, the seal faces must be flushed with a constant, cool and clean liquid, and in many applications this is provided from a separate seal support system. A properly configured seal support system provides lubrication, prevents overheating (caused by dry running) and maximizes reliability.

Mechanical seals perform a simple but vital role – to prevent fluid leaking from the shaft region of pumps and other rotating equipment.

In the selection of the seal support system configuration, or piping plan, there can be temptation by third-party consultants, OEM equipment suppliers, and/or plant maintenance and engineering staff to consider only the initial cost of a mechanical seal support system.

The operational stakeholders responsible for energy consumption have limited visibility of how that seal piping plan impacts on wider energy usage and efficiency.

The seal energy audit provides a useful bridge between these parties. Inadequate seal support systems contribute to 22 per cent of all mechanical seal failures.

What’s involved in an audit?

The audit involves the inspection of each piece of equipment, recording seal arrangement, support system configuration, process data and seal system parameters such as water flow and temperature.

Having collated the existing plant data and performed heat flow calculations, it’s then possible to calculate the amount of energy impact of each and every sealed rotating shaft application on the plant. High energy use can be easily identified and reviewed to see if a more efficient seal and piping plan configuration is appropriate.

A typical summary from an audit report identifies potential opportunities, the investment required to upgrade and the potential returns. Most importantly, it highlights and prioritizes “low-hanging” opportunities, which with minimal investment can deliver significant reductions in energy use and improve seal, and consequently pump, reliability.

In seal injection processes, the starting point for quantifying energy waste is to read and graphically represent temperatures using thermography. The temperature scale shows the difference between the process temperature and the injected seal water.

If the process contains water and the final product is paper or concentrated liquor to fuel a recovery boiler, the water must ultimately be removed. And regardless of how the water is squeezed out or evaporated, energy will be consumed.

A typical example is a pulp and paper pump application where an API Plan 32 configuration is used. This involves injecting a clean or cool liquid at 70°F from an external source directly into the seal chamber and can be used with typical braided packing and single mechanical seals.

The energy cost is in the frictional energy consumed by the seal or packing, plus the pump heat soak, and the energy consumed in additional downstream processes to remove flush-to-process dilution and/or restore process temperature.

A general rule of thumb for pulp mills in Western Canada is for every gallon of water injected in to the black liquor process stream, it costs $0.01 CAD to evaporate it. Using a very conservative 1 gpm of injected seal water, that equates to over $5,000 CAD per pump per year.

Applying the Fluid Sealing Association/European Sealing Association lifecycle cost estimator (version 4.1) and the built-in program defaults, this calculates predicted power consumption of 7.56 kW due to heat soak, equating to an energy cost of roughly $6,619 CAD a year per application.

Another key consideration in a seal energy audit is the energy impact of friction. In the Plan 32 example, the direct power consumption is roughly $130 CAD for a single mechanical seal and $779 CAD for mechanical packing. This reveals a heat soak factor 50 times greater than the direct power cost of a single seal.

Having considered all these factors, an effective seal energy audit will suggest solutions that achieve not only energy and water savings but increased reliability, reduced operational costs and possibly increased production opportunities.

In theory, one solution could be simply to reduce the amount of liquid being injected into a system. However, this tends to compromise seal life, increasing the risk of leakage and leading to costly equipment downtime and process outages.

The most effective solution would be to upgrade the existing mechanical packing or single seal to a dual seal along with a seal support system in a modified configuration such as a modified Plan 53A, a pressurized barrier fluid circulation system for a dual seal configuration.

This extends seal life by controlling the mechanical seal environment. It operates with a barrier fluid at a pressure higher than the seal chamber, meaning the barrier fluid acts as the fluid film at the inner seal face set.

In a typical system, pressure is controlled by a regulator on the top of a tank and make-up water is connected directly to the tank from a water header or water main. 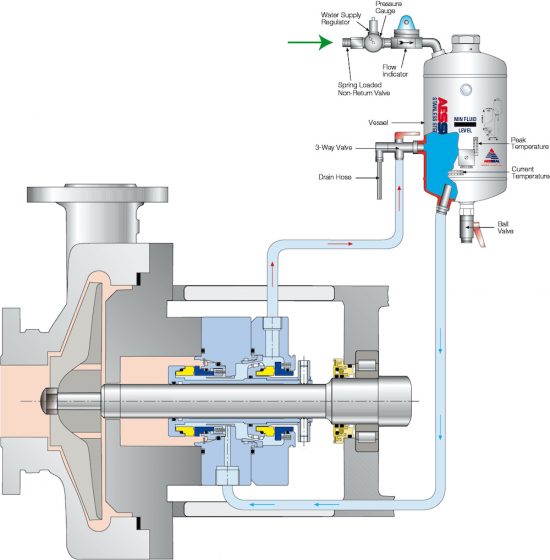 If there is a loss of barrier fluid, the water source connection automatically recharges the system, while a flow indicator verifies that water is not entering into the process fluid.

Water quality is controlled by using an in-line filter, which requires infrequent replacement because the flow of water is not continuous. A properly sized system can reduce water use to less than 150 millilitres per day. This also makes it possible to reduce filtration from 50-microns down to an optimal one micron.

If there is a loss of barrier fluid, the water source connection automatically recharges the system, while a flow indicator verifies that water is not entering into the process fluid.

Following a seal energy audit performed in 2017 in partnership with a Canadian operation of a major North American producer of pulp and paper, it was calculated that converting 17 packed pumps to dual seals and water management seal support systems would realize a total savings on a yearly recurring basis of more than $200,000.

It was discovered that the operation was evaporator-limited due to the ingress of flush water into the black liquor stream. The savings are a result of increased production, reduced maintenance costs, and reduced energy and flush water usage.

The audit results have led this operation to further consider their liquor pump applications in the recausticizing area of the facility.

Brad Zurbrigg is a technical sales representative at AESSEAL Canada.

This article originally appeared in the Fall 2020 issue of Pulp & Paper Canada.