In February 2003, we visited Whitecourt, AB, for the first time and knew that it would not be our only stop at this thriving community of over 8000 inhabitants which boasts of its relationship with the forestry industries. Nestled at the confluenc... 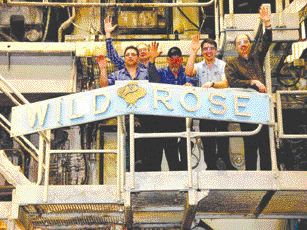 In February 2003, we visited Whitecourt, AB, for the first time and knew that it would not be our only stop at this thriving community of over 8000 inhabitants which boasts of its relationship with the forestry industries. Nestled at the confluence of the Athabasca, McCleod and Eagle Rivers, 177 kilometres northwest of Edmonton, the city motto: “Where Even the Rivers Meet” is most appropriate. Today, Whitecourt is a growing community, located in the rolling hills of a mixed forest, which has strong ties to the natural resources of the surrounding area.

To complement the significance of the forestry sector, the Whitecourt and District Heritage Society opened a museum and forestry interpretative centre in September 2000. It features a multi-media gallery which explores the role of the forest in the evolution of the community. Main exhibits highlight the relationship between aboriginal people and the forest, the effects of the settlement on the forest, and the present-day economic impact of the forest industry on the region. Top this off with a guided tour of the mills themselves, organized by the local chamber of commerce, and one begins to appreciate the depth of the relationship that Whitecourt shares with its forestry-related industries.

“It warms my heart to show off my (paper) machine to a youngster who comes to see how paper is made”, said Jim Johnson, machine operator at ANC since 1990. The work environment is also clean, the floor is almost spotless and the area is brightly lit. “It is symbolic of an attitude that Iain (Thomson, mill manager) instills in all of us,” added Johnson.

Whitecourt was first named Sagitawah (a Cree word meaning, “where the rivers come together”) and was established in 1897. The first settlers started to arrive in 1904, but it wasn’t until 1921 with the building of the railway, that commerce took hold. The small trading settlement grew rapidly with logging and lumber being the main industries. Following the discovery of oil in nearby Leduc, oil and gas exploration in the Whitecourt area became an ever-expanding industry. The first large gas find was in the Windfall field in 1955.

“There is a small town feeling here, but everything that larger cities offer is also available. Where else can you snowmobile, fish, and curl all within blocks of your home?” said Keith (Festus) Best, production co-ordinator at ANC.

Alberta Newsprint Company was formed in 1989, as a joint venture of the Stern Group (Whitecourt Newsprint Company Limited Partnership) and West Fraser Mills Limited and remains Alberta’s first and only paper mill. With its state-of-the-art paper machine, dubbed Wild Rose, ANC produces high quality newsprint. Approximately 70% of the production is shipped to U.S.-based customers, including Gannett Company, the largest publisher in North America, and also the publisher of USA Today. ANC also provides paper in Canada to CanWest Global Communications, publisher of the province’s Edmonton Journal and Calgary Herald.

The ANC paper mill is an integrated facility utilizing a thermo-mechanical pulping (TMP) process supplemented by a de-inking plant to produce newsprint. Approximately 95% of the pulp is produced using wood chip residuals from sawmills, with the remaining 5% provided by recycled paper through the de-inking plant. The recycled fibre component represents up to 50 tonnes of waste paper. The TMP plant and paper mill commenced operation with a capacity of 220,000 metric tonnes of paper per year. Today it has increased to 269,000.

ANC’s mission statement focuses on five distinct objectives: cost effectiveness, customer focus, team work, safety and corporate citizenship. Within its relatively short 14 years of operation, the company has succeeded on all of these levels and prides itself on its cost efficiency and its company-wide approach to its employees.

Ronald N. Stern who, despite being president and CEO, is known on a first-name basis on the floor, said that much of the success of the operation can be attributed to “the team approach that we take”.

At ANC employees accept responsibility not only for their own jobs, but also for the overall success of the company, and they do this readily. Gisele Renaud, technical supervisor, has worked at the mill since 1989 and applauds the manner in which, “people are asked to get involved in making decisions.”

“Input is not just encouraged but expected and, in this way, the decision-making process is pushed down the line to involve all the employees, added John Palmateer, instrument technician. “People here trust each other and help each other,” said Keith Best, production co-ordinator. “This is what creates that special attitude that we call the ANC way.”

The cornerstone of the workforce philosophy in the ANC way entails scrapping narrow job classifications and encouraging employees to develop multiple skills and handle a wide range of tasks. “Titles do not matter here, and that represents a breath of fresh air to me,” said technical director Gary Smith, who also does as much PR and marketing as his regular job. At ANC, employees are not only encouraged to ask questions, but to share information and to always be ready to explore the possibility of doing things in a better way.

Stern looks at ANC as a concrete example of what can happen when talented people are brought together in an open co-operative work environment. ANC prides itself in its implementation of flexible work practices, which it traces back to the recruiting stage when the mill first opened in 1990.

“The core values were created by input from the employees. We don’t care just for production output, but equally for quality, the environment and for safety issues,” said John Palmateer.

Employee satisfaction is a key variable that Iain Thomson deals with daily as the mill manager. He said, “We focus on the people and not just on the equipment.” By doing this, he can turn to any employee in the mill and ask them to make their own decisions, “as if they were the owners” and Thomson does this regularly. In the eight years that he has been at ANC, which he refers to as the highlight of his career, Thomson has promotes a style of management where, “the employees are really in charge, and they just make me look good.”

Whether you refer to it as a transparent, participatory, or open management style, it is hard to ignore that there is something very special in the air at ANC – pride for the past and enthusiasm for future challenges.