News
The importance of Leadership in Creating a Sustainable Safety Culture 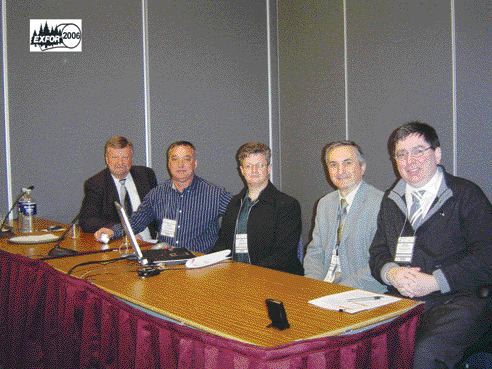 From L to R: Ron Buchhorn

The Mechanical Engineering and Maintenance Committee of the Pulp and Paper Technical Association (PAPTAC), along with the Pulp & Paper Health & Safety Association (PPHSA) sponsored one of the…

The Mechanical Engineering and Maintenance Committee of the Pulp and Paper Technical Association (PAPTAC), along with the Pulp & Paper Health & Safety Association (PPHSA) sponsored one of the technical sessions during PaperWeek International 2006, in Montreal. During this session, there was an Industry Panel of experts who spoke on The Impact of Leadership on Safety Performance. Patrice Cayouette (vice-president and resident mill manager, Bowater Gatineau), Michel Simoneau (president of COPE Local 110 from Bowater Gatineau), Ron Buchhorn (senior vice-president, Operations, Catalyst Paper) and Fraser McQuarrie (president, Local 1132 CEP from Catalyst Paper) were members of the panel that was chaired by Herb Tessier (senior consultant, DuPont Canada).

Cayouette and Simoneau gave the audience an overview of the safety improvement journey upon which the Bowater mill had embarked in 1993. At that time, the mill was experiencing one recordable injury every three days. In 2002, they peaked at one recordable injury every 73 days, a twenty-four-fold improvement. Cayouette said that the mill subscribed to the philosophy that all hazards cannot be eliminated, but risks can be managed to a level where they do not result in injuries to workers. He also talked about the necessity of getting organized to manage safety and the need for both management and employees to get personally involved. Simoneau added that he believed that the key to success at the mill is that everybody is involved in safety committees: hourly employees, technical personnel, supervision or management are all treated as equals. Safety is no longer a topic of confrontation; it is a cause for collaboration.

Ron Buchhorn made a passionate presentation on the safety culture improvement journey that Catalyst Paper embarked on about four years ago. The initial steps occurred when the company’s board of directors questioned the gap between the current safety performance and world class standard. The leadership embraced the cause wholeheartedly and provided the impetus towards closing the gap. Ron was aware that Dr. Jim Stewart, a retired executive formerly from DuPont Canada, had developed a method to assess the safety culture of an organization as part of a post-doctoral study at the Rotman School of Business. The process consisted of a survey questionnaire to go to the roots of a company culture followed by a Future State Visioning Process to engage the whole organization in an effort to change. With the help of DuPont Safety Resources that had acquired the rights of the technology, Catalyst Paper surveyed the employees at its four mills and conducted an FSV workshop involving 170 employees who represented a cross-section of the whole organization. The results showed that, within three years, the company has managed to reduce its recordable injury rate from the mid-ten’s down to the range of 3.0 with a lost time injury rate in the range of 1.0.

Fraser McQuarrie followed Ron’s presentation by adding that he believes that the mutual respect that union and management are showing towards each other by “walking the talk” is a key factor in their collaboration. He added: “From a union perspective, our values and beliefs are respected by management which allows us to be proactive with our members and increase the involvement at the crew level because they see results.”

When questioned by a participant about the state of labour relations, Fraser replied jokingly that he made sure that the HR department did not feel redundant last year by filing at least one grievance. He added that grievance resolution was almost a full-time job in the past but no longer. The safety improvement effort contributed a lot towards the improvement in labour relations and in the spirit of collaboration towards resolving issues in safety or other fields.

There were no doubts in the minds of the people in the audience that all four panelists were deeply committed leaders, working towards continually improving the safety performance of their organization.

The session concluded by thanking the panellists for their eloquent demonstration that safety, like any other aspect of the business, can and must be managed. And where it is lead by committed and involved leaders like the panel members, it produces benefits far beyond reduced injuries.

Herb Tessier is a 30-year veteran with DuPont and is a senior consultant in the Safety Resources group. He can be reached at herb.g.tessier@can.dupont.com