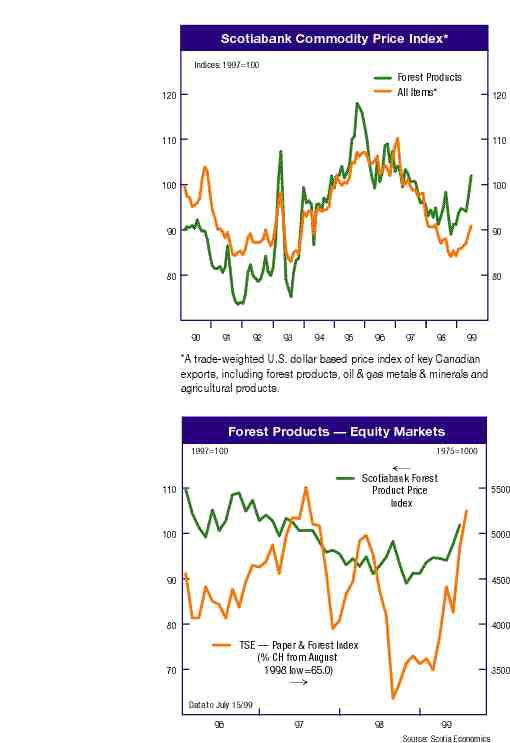 The forest products industry will be firing on all cylinders in the second half of the year, with price increases announced for newsprint, a broad array of printing and writing papers and linerboard a…

The forest products industry will be firing on all cylinders in the second half of the year, with price increases announced for newsprint, a broad array of printing and writing papers and linerboard as well as the recent strength in U.S. building products. These gains, combined with the benefits of industry cost cutting, consolidation and restructuring, are spurring a return of investor interest to the forest products sector, enhancing the ability to raise equity capital. The TSE — Paper & Forest Index has advanced by 65% from the August 1998 low and has been the strongest performing TSE sector this year — outpacing gains in oil and gas (35%), industrial products (27%), metals & minerals (26%) and communications & media (22%).

Investors have reacted positively to the good second-quarter financial results being announced by lumber and oriented strandboard producers in both Canada and the US. Housing starts in the US will average a robust 1.63 million units this year — up from 1.62 million in 1998 — buoyed by a near fully employed labor force (4.3% unemployment rate). US single-family construction has been exceptional so far this year at an annualized 1.349 million units — the highest since 1978, when demographics were much more favorable.

New US mortgage applications in June reached their highest level of the decade, though refinancing has dropped under the weight of an 87 basis point increase (to 7.58%) in 30-year mortgage rates since last October. While building activity could start to moderate in the autumn, low inventories of new homes for sale — only 4.3 months’ supply in May compared with a more normal five months — will continue to provide support.

The focus of investor interest will likely shift to pulp and paper over the next six to 12 months, given prospects for a broad based improvement in prices. With newsprint prices among the softest of any pulp and paper category in 1999, the recent announcement of a US$50 October price increase by North American producers has been a particularly welcome development for investors. While there is some uncertainty over implementation, the announcement has steadied prices in July. Eastern US newsprint prices have dropped from a peak of US$580 in November 1998 to about US$475 per tonne in June (slightly more for some large publishers).

Consumer inventories of newsprint are on the low side — 40 days supply in May compared with 42.7 in the past five years. US consumption has advanced by 1.9% so far this year — a healthy rate for a mature market — with particularly robust demand in the West (especially Washington). A millennium advertising surge should boost demand in the fourth quarter. Exports to Asia are also picking up, while US imports from South Korea have started to wane.

In the lightweight coated sector, Canadian and US papermakers also plan to boost No.5 paper by US$60 per ton in the third quarter. US magazine ad pages advanced by a solid 2.8% in the first half of 1999 — led by drugs and remedies, travel and technology. Though catalogue circulation slowed in the first half of 1999, most US cataloguers will boost their mailings by 10 to 15% this autumn due to expectations of buoyant fourth-quarter holiday sales, millennium-related advertising and improved consumer targeting. Catalogue profits were good in the second quarter.

Uncoated freesheet papermakers are also phasing in a US$60 per ton price hike for offset rolls and xerographic paper effective mid-July — spurred by a strong US economy, the growth of home computers and some restocking after last year’s consumer inventory correction. Despite high installment debt, consumer spending has been buoyed this year by rising household wealth through stock market gains. Many households have refinanced their mortgages at lower rates, freeing up income, though refinancing is now tapering off. Y2K document reproduction, ahead of any computer difficulties, may bolster white paper demand in the second half. Capacity reductions by two US companies and a recent strike in Ontario have cut supplies.

New paper machines in Indonesia and China (over 2 million tonnes) have not as yet had much impact on US supplies of uncoated freesheet, though some Indonesian cut-size paper has been seen. Overall Asian imports only represented 1.1% of US consumption in the first quarter. Logistics and costs probably favor Asian exports of copy paper rather than offset rolls. Offset rolls require greater inventory management and service for commercial printers than standard copy paper.

Despite these positive developments, markets are expected to remain competitive — as evidenced by the agreement of a major US papermaker to market Asian paper in the US. The recent strength in US consumer spending, which has buoyed advertising and paper demand, may also wane for a time in early 2000. Tight cost control, customer service and ongoing research on new product and process development will remain vital to success.