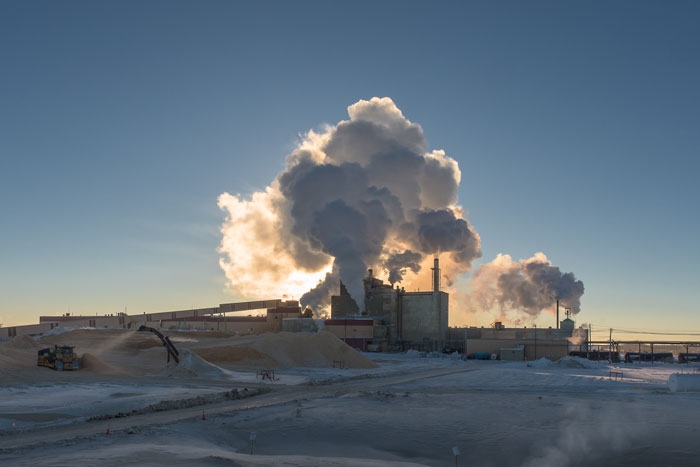 In just over two years, a pulp and paper mill in The Pas, Manitoba has become the comeback kid of the industry, rebounding from the brink of closure with improvements in equipment and processes, and new measures in safety and sustainability.

In a deal that closed Nov. 10, 2016, Canadian Kraft Paper (CKP), a new subsidiary of the American Industrial Acquisition Corporation (AIAC), purchased Tolko’s Manitoba Kraft paper mill and its idle sawmill, which were both set to shutter by Dec. 2 of that year, eliminating 332 jobs. At the time, paper orders had dwindled to zero, and a decommissioning plan to shut down the operation, close company roads and consume all stockpiles of wood, chips and hog fuel was already underway.

To help the new owners with the transition, the Town of The Pas gave CKP a three-year relief on property taxes, and the province of Manitoba allowed a three-year break on solvency payments for the existing Tolko pension plans.

Since then, CKP has made quick work of putting the mill into a position where it may succeed. It was re-certified to the CSA Sustainable Forest Management Standard and the Programme for the Endorsement of Forest Certification (PEFC), and re-approved for its forest management licence on 8.7 million hectares (22 million acres) of woodlands. It also entered into a 50-50 partnership to share forest management responsibilities with seven area First Nations. All of the Tolko workers kept their jobs after taking a 10 per cent pay cut for two years as part of the acquisition, and in July of 2018, Unifor Local 1403 and the mill signed a new three-year collective agreement that increased wages, training premiums, leave, benefits and safety equipment allowances. CKP reported five lost-time accidents in 2016 and seven in 2017. As of December 2018, there’d been two lost-time accidents for the year, with a 35 per cent drop in the recordable injury rate to 1.76.

CKP has also been named the 2018 Mid-sized Company Turnaround of the Year by the Turnaround Management Association, a global professional organization dedicated to corporate restructuring and distressed investing.

Andre Murphy, mill manager at CKP, says that AIAC brought in experts to initiate the overhaul. Tony Zandos, senior vice-president of AIAC, oversaw the business side, and Jari Vainio, AIAC’s former SVP forest products and packaging, arrived in The Pas in early 2017 to become Canadian Kraft Paper’s SVP and operational and forestry expert. “[Jari] has been a conduit to our owner [AIAC chairman Leonard M. Levie], and has helped him to understand this business,” Murphy says.

The mill improvements began immediately, starting with the steam and chemical recovery areas. “A lot of the things that we are doing, we’d talked about with our previous owner, but we never could really get enough attention to the investment required to move on [them],” Murphy says. “Jari was able to show that these are the types of things that we really do need.”

While the recovery boiler wasn’t one of the mill’s primary bottlenecks, the improvements started there in 2017 with a $9-million investment in a new superheater supplied by GE. Another $12 million in small projects followed throughout the year, such as installing a high-speed vision camera system and redistributing oxygen analyzers on the recovery boiler.

In 2018, CKP took on even bigger projects in the power boiler and pulp production areas.

Conserving energy
A vibrating conveying grate supplied by Detroit Stocker was installed on CKP’s power boiler in September 2018, which allows the mill to burn more waste wood instead of hog fuel. Process Baron upgraded the ash system, and Jansen Combustion upgraded the air system. In the past, operators had to clean the grate themselves and, during the manual cleaning process, used fossil fuels to produce the required steam from the power boiler.

The new automatic grate pulsates intermittently, generating more energy for steam. This addition is expected to help the mill reduce its fossil fuel consumption by 11 million litres annually, and, in turn, cut down on the subsequent CO2 emissions that come from burning hog fuels.

Tamsin Patience, technical manager at CKP, works with process technologists and engineers on energy management. She says that while the mill still uses some waste oil, it is recycled from within Manitoba, Saskatchewan and Alberta, which reduces the amount of heavy Bunker C fuel needed. CKP can also generate electricity using an on-site steam turbine, offsetting the power it requires from Manitoba Hydro. 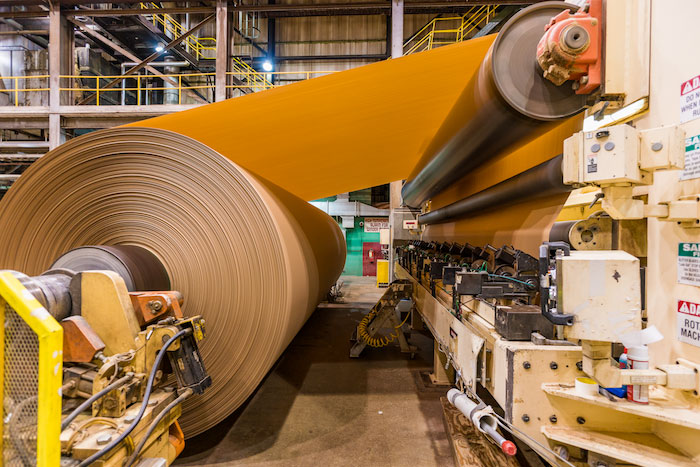 Optimizing fibre
The mill has also completed about 75 per cent of the installation of a chip thickness-screening machine, which Murphy says will reduce chemical usage and cut wood costs by providing larger yields out of the digester from higher-quality chips.

The machine, supplied by Raumaster Oy, will provide optimum chip quality and size to the digesters. Oversized chips (thickness greater than eight millimetres) and contaminants will be removed by the disc thickness screen and either further processed in the chip improver or removed from the chip supply using a separation system. Accept chips will proceed through the roll fines screen to remove further rejects – undersized chips (thickness less than two millimetres), pins and fines – which will be transported to be mixed with waste wood and combusted as fuel in the power boiler. Two new belt conveyor systems will be added to bring chips to and from the thickness-screening machine.

“Right now, we have no real screening system, so we just cook and that dissolves some of the fibre we have,” Murphy says. “It’s going to help us reduce the chemical load that’s required to produce pulp, which then also helps offload the recovery cycle because we won’t be overusing chemicals unnecessarily.”

The reduction of chemicals CKP uses in pulping will also ultimately maintain the strength of the fibre. The mill uses 100 per cent virgin fibre from the slow-growing softwood native to northern Manitoba and Saskatchewan, chipping about 30 to 35 per cent of its own roundwood onsite, and bringing in the rest from mobile chippers on its woodlands or from other sawmills. This translates to about 2,500 cubic metres of chips per day travelling through its single production line to manufacture high-performance unbleached extensible sack kraft paper, which is then sold to international converters for heavy-duty bags and food-grade applications. 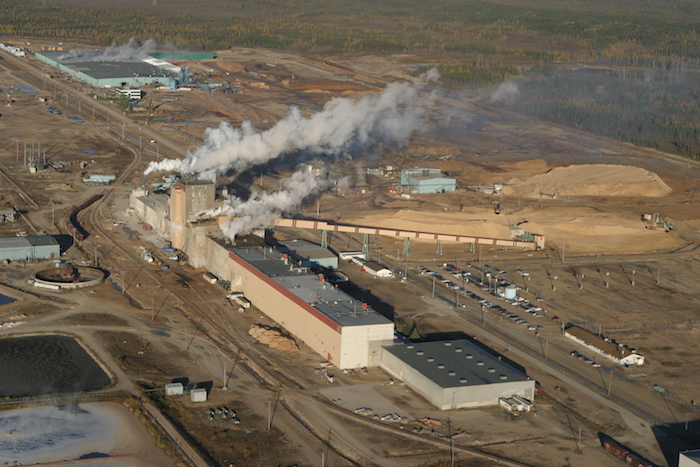 Looking ahead
Production has already increased as a result of the improvements – by about seven per cent over the past two years. CKP’s five-year capital plan will see the mill increase its production by at least another 25 per cent.

In July 2018, CKP signed an agreement to form a 50-50 partnership with the Nekoté Limited Partnership (a corporation representing seven First Nations) to co-manage the 8.7 million hectares of forest under CKP’s forest management license (FML) – the largest forest area co-managed by a mill and First Nations communities in Canada. The partnership, named the Nisokapawino Forestry Management Corporation (NFMC), oversees all forest management planning and permitting, silviculture and renewal activities, and third-party certifications.

Andrew Forward, general manager of NFMC, says that at the time of AIAC’s acquisition of the Tolko mill, several First Nations chiefs who eventually formed Nekoté were already at the table with the province of Manitoba seeking a strengthened, meaningful involvement in forest management decision making. Over a period of 18 months, Nekoté and CKP developed a partnership concept that would benefit both parties – beyond participation in forest management decisions, Nekoté would also see more opportunities for employment and environment protection, while CKP would benefit from Indigenous knowledge in forest management and have more freedom to access the low-cost fibre in the region.

Now, CKP is communicating directly with Nekoté about jobs in the mill, woodlands division or with contractors so the information can be circulated to the First Nations communities. And CKP is changing its method of engaging Indigenous stakeholders, forgoing mill-driven feedback sessions that weren’t always well received in the community. “That was pointed out as a major weakness,” says Forward. So in December 2018, Nekoté hired a Cree-speaking, Indigenous employee to act as a liaison and encourage participation between NFMC and the Nekoté communities.

“This is a legitimate business partnership with legitimate costs, and a need for legitimate outcomes and outputs that are tangible and that will allow the pulp mill to continue,” says Forward. “I think we’ll get good feedback [with the liaison], not just from the communities but in understanding if we think this is the best way to do this.”

Also in 2018, CKP began a land spreading pilot project in partnership with Manitoba Sustainable Development to study what the environmental impacts would be if sludge from its effluent system were spread across the mill’s site instead of transporting to landfill. Tamsin Patience, technical manager, is conducting soil and sludge analysis for the project. She is also sending samples to a consortium at the University of Toronto that is identifying beneficial uses for sludge and boiler waste. “We’re hoping we can do our part here,” she says.

As The Pas’s largest employer, CKP also donates to community, school and sports groups, and in July 2018 committed $25,000 to open a new spray park for locals.

“The things we are accomplishing now – as much as we have the investment, it would be very tough to do without the commitment of all of our employees on site here,” says Murphy. “The other exciting part about being owned by AIAC is the investments and earnings we are making on our site are actually staying in our operations. We’re reinvesting in our business.”