A mill that had a shaky future in 2008 has been revitalized, and will have a cleaner, brighter future thanks to the federal government's $1-billion Pulp and Paper Green Transformation Program. 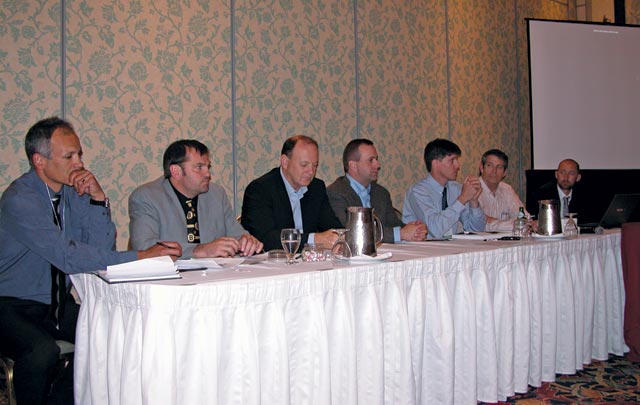 Speakers at the PacWest green transformation panel took turns spreading the good news about PPGTP projects at their mills.

A mill that had a shaky future in 2008 has been revitalized, and will have a cleaner, brighter future thanks to the federal government’s $1-billion Pulp and Paper Green Transformation Program.

Among Canadian pulp producers, Domtar received the largest allocation from the federal program – $143 million – and proceeded to pour more than half that amount into its Kamloops pulp mill.

To a lesser extent, a similar story has been repeated across the country. Pulp and paper producers are adding their own monies to the federal pool, and proceeding with capital projects that might never have happened without the Canadian government’s response to the now-defunct U.S. black liquor tax credit.

Because of the stipulation that PPGTP projects had to improve the environmental performance of the mill, many of the funded projects incorporate boiler rebuilds, precipitator upgrades, and installation of turbine generators to harness surplus energy.

Installation of the bull nose and screen tubes was one of the most intricate of the changes, says Dennis Castle, project manager at Domtar Kamloops. Parts of the unit were assembled in a staging area outdoors, and the crane did a few practice lifts to ensure the load was balanced.

On both pulp machines, new high efficiency dryer coils were installed. This increased the capacity and energy efficiency of both dryers.

An air emissions improvement project is expected to be completed in October.This includes the installation of new precipitators for the mill’s power boilers. The overall reduction in emissions will be about 70%.

Speaking at PacWest in June, Tim Lanteigne described Daishowa-Marubeni International’s green power enhancement project at the Peace River Pulp Division. The objectives were to increase the capacity of the existing recovery boiler, improve the environmental performance of the recovery boiler precipitator, and increase exports of green electrical power. One benefit of the project is expected to be an increase in softwood pulp production of 22,300 ADMt/yr. Plus, the company will be able to increase its electrical power exports to Alberta’s electrical grid by 126,000 MWh/yr. Recovery boiler particulate matter emissions are expected to decrease by 0.87 g/s.

The project required an upgrade to the recovery boiler and precipitator, and the installation of a 25 MW condensing turbine generator. The recovery boiler upgrade was a $15.7-million undertaking, including upgrades to the circulation, combustion air system, primary superheater, and the smelt dissolving tank scrubber.

On the recovery boiler precipitator, switched integrated rectifiers (SIR) were installed on the A and B fields. As well, spiral wire electrodes were replaced with discharge electrodes in the A fields. Captial cost was $4.5 million.

The condensing steam turbine generator, condenser, cooling tower, and auxiliaries had a price tag of $38.3 million. The total for the green power enhancement project was $59.1 million, of which $40.5 million was PPGTP credits, and $18.6 million was invested by DMI.

Lateigne said the plan was to have all the new equipment up and running by mid-October.

As pulp producers branch out into producing green power, there are also infrastructure considerations. Alberta-Pacific, for its green power project, constructed a 28-km power transmission line and built a new on-site substation, in addition to installing a steam turbine generator and implementing steam saving initiatives at the mill.

Al-Pac was expecting delivery of the turbine in July.

Nichol noted that the PPGTP funding, indirectly, allowed the company to move forward with a replacement of the distributed control system with Honeywell’s Experion process knowledge system.

At Canfor, a stock transfer line between the Prince George Pulp (PG Pulp) facility and the neighboring Intercontinental mill has allowed the mills to increase green power production. The company was able to increase black liquor production to fully utilize the recovery boiler capacity at PG Pulp and take advantage of that mill’s condensing turbine generator.

At PG Pulp, a boiler feed water upgrade is underway. PG Pulp does not have demineralizers as most mills do, but uses hot lime softeners instead. With this upgrade, blow down rates will be reduced from 8% to 1.5%. Energy use will decline by 650,000 GJ/yr and effluent temperature will be reduced by 0.50C on average.

The company is also installing a precipitator on the No. 1 power boiler at PG Pulp. The result will be a decrease in particulate of about 100 to 130 t/yr.

This mill also undertook an odour reduction project to collect DNCG from various sources that were not previously collected.

The upgrade allows Northwood to shut down one of two hog fuel boilers on the site, and is expected to reduce TRS emissions by 35 t/yr and particulate emissions by 240 t/yr. In addition, it will reduce the mill’s consumption of natural gas. Start-up is planned for the fourth quarter of 2011.

AV Cell in Atholville, N.B., is turning to biogas as its source of green energy. The mill expects to have an aerobic reactor up and running in a few months. The reactor transforms mill effluent into a methane-rich biogas.

Shankar Ray, CEO of AV Group, told the Fredericton Times & Transcript that the technology used at the Atholville mill will remove about 50% of the sulphur dioxide from the effluent, which makes the transformation into a biofuel more efficient. Using a filtration system, the reactor can create biogas with 65% methane content, high enough for use in the mill’s boilers, reports the paper.

The $18-million, closed-loop system will be a renewable energy source, able to account for 25 to 30% of the mill’s energy, said AV Group’s corporate energy manager, Rajeev Goel. He calculates that the new reactor will displace 2.2 million litres of oil and 7,000 green tonnes of biomass each year.

At Nanaimo Forest Products’ Harmac Pacific site, the company’s $27-million in PPGTP credits was allocated to a variety of small projects. Doug Barbour explains that 11 projects consumed the bulk of the funding.

Among those were the installation of hog presses and hog conveying equipment to decrease moisture content in the hog fuel. Since coming online in Jan. 2011, these change
s have eliminated the need to supplement hog fuel with natural gas, improved the power boiler efficiency, and resulted in higher boiler feed rates.

Upgrades to two of the lime kilns have resulted in more stable operation, less natural gas use, and more uniform white liquor. For the number 3 kiln, instrumentation was upgraded and supervisory control implemented. At the number 2 kiln, Harmac Pacific installed a discharge end dam, replaced the lime mud filter showers, and upgraded the chain section.

Altogether, the small projects will add up to energy savings of 160 GJ/yr in natural gas usage, 250 MW/yr of electricity, and 50,000 lb/hr of steam use.

For West Fraser, the PPGTP project list included a 28 MW/hr cogeneration plant and ClO2 generator energy upgrade for Cariboo Pulp, plus investments in low consistency refining for Quesnel River Pulp and Slave Lake Pulp, reported Brian Grantham. At Hinton Pulp, he told the PacWest audience, a pressure diffuser and an upgrade to the pulp machine were on the list.

The pressure diffuser installed at Hinton Pulp is a PD100 Metso unit, which has a capital cost of about $15 million. The investment is expected to achieve a 3.8% reduction in BOD and TSS, and to increase WBL solids 1.1%, causing an 8% reduction in evaporator steam usage. The pressure diffuser should also contribute to less defoamer usage; reduced consumption of ClO2 and NaOH; and better pulp quality.

Grantham explained that the major components of the pulp machine energy upgrade were the top former, combi press section, 10 dryer decks, the dry end repulper and the cutter/layboy.

Capital cost of the project was about $37.5 million. The Flakt dryer was converted to 80 lb. steam, which permits more power production. Mill production capacity increased to historic levels, and, as a result, Hinton Pulp is firing more black liquor, leading to more power production. The net energy benefit is calculated to be 2.0 MW/hr.

The environmental benefits of all the PPGTP-funded green transformation projects are laudable. There have also been operational benefits that will last for many years, and the projects provided a shot in the arm to the local economy of many mill towns. But the intangible benefit is the sense of renewal, and the optimism that stems from seeing construction crews at work at mills across the country.