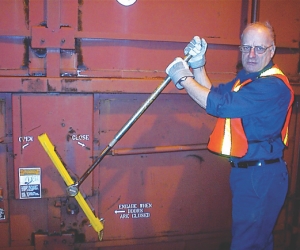 When railcars arrive at a warehouse – whether at SFK Pte in St-Flicien, Qu., or any other similar plant – a number of door cranks arrive positioned vertically, while others are horizontal, or at va…

When railcars arrive at a warehouse – whether at SFK Pte in St-Flicien, Qu., or any other similar plant – a number of door cranks arrive positioned vertically, while others are horizontal, or at various positions in between. They are often badly positioned for workers to turn them. As a result, they have to struggle to turn the cranks, and the mechanism can get stuck, preventing the railcar doors from sliding open.

A team at SFK Pte has addressed the problem with a homemade device that has garnered multiple awards from regional and provincial safety organizations.

The 1,050 tonnes of bleached kraft pulp produced at St-Flicien every day is delivered to clients by truck and train. Employees load the pulp into no less than 40 railcars on a weekly basis. According to Jrme Laprise, the plant’s security superintendent, the wagon doors are difficult to open about 40% of the time.

Before developing the new device, the factory’s workers used a much more rudimentary system when faced with this problem: they would insert a steel pipe into the end of the crank to create a lever. While this system did make it possible to turn the cranks, it involved much effort and carried a high risk of injury. If the lever was badly positioned, the workers were susceptible to falls and muscle strains.

“Sometimes, it took two men,” Laprise says. “And sometimes, the crank would break.”

Furthermore, the situation was similar when it came time to close the doors.

SFK Pte lodged a number of complaints with the carrier, but did not get any concrete results. A number of investigations into how other plants were solving the problem were made. St-Flicien workers looked into the device developed on-site at the Domtar plant in Lebel-sur-Quvillon, for example.

Not finding a ready-made solution, the St-Flicien workers began to discuss their expectations and criteria in order to come up with an in-house solution.

“It needed to be something light,” says Laprise. “A simple, manual tool, which we would be able to use in all positions, no matter what position the crank was in.”

“Every plant has its own ‘inventor,'” explains Laprise. At St-Flicien, his name is Aim Bureau, a welder. After listening to suggestions from the operators, Bureau started to work on the desired tool. His creation would eventually help things go a lot quicker.

The device is made up of a metal piece that has been designed to fit around the principal section of the crank. At the centre of this steel component – which is in the form of a large bar – a 24-inch ratchet key has been welded on. The device is held by a safety pin, which makes sure the system stays in place.

When the time comes to open a railcar door, the worker fits the device on the crank. The ratchet key then does the rest. In an ergonomic sense, the worker is always positioned correctly for the job, no matter what position the crank is in.

“If he has to position the bar horizontally, he places the key horizontally,” Laprise says. “He is then in the right position to force, pull, push, and turn the crank.”

The operators have been very satisfied, says the superintendent. Not only does this system allow workers to better manage the force they apply, but it has also eliminated the potential risks of injury associated with this type of manoeuvre.

This innovation developed at St-Flicien is easily exportable, says Laprise. It could, of course, be used in other paper plants, but also in other types of factories that transport their merchandise by train. SFK Pte has welcomed papermakers from Baie-Comeau and other corners of the province, and manufacturers from the aluminum industry have also come to see the invention.