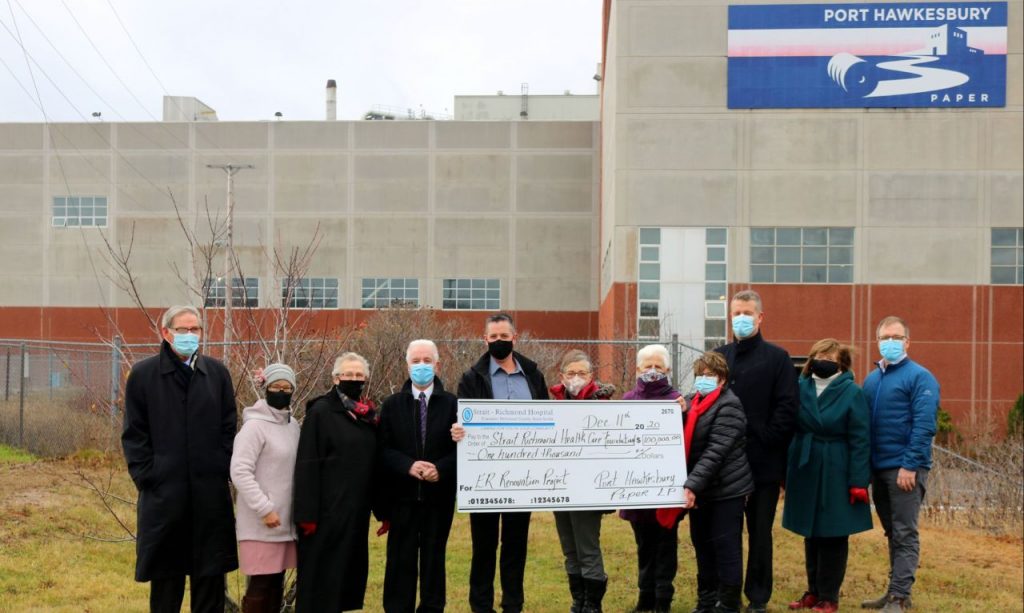 “In 1980, approximately 1,100 employees invested in their health care future by contributing through a payroll deduction campaign to the building of the new hospital,” says D.R. MacDonald, who was personnel superintendent of Nova Scotia Pulp Limited, the name of the facility at the time.

“It mattered to many of us that we support a new hospital to serve our community. The nearest medical facilities at that time were either in Sydney or Antigonish, and we felt it was so important to have closer access to emergency and medical services,” says MacDonald, who served as a company representative on the community committee to establish the hospital.

This month, D. R. and his son Dean were on hand to present the new cheque for $100,000 to the members of the Strait Richmond Hospital Foundation. Dean MacDonald joined the mill in 1983 and has held varying roles over the years; he is currently line manager of Paper Machine 2.

“On behalf of Port Hawkesbury Paper, we are excited to be contributing to the hospital’s major renovation project,” says Dean MacDonald. The mill’s gift will go towards enhancing the emergency department and the creation of a new ambulatory care area.

Mike Hartery and Bevan Lock, co-mill managers, indicate that the gift will also recognize a former colleague, Marc Dube. A plaque commemorating Dube will be installed in the newly renovated area of the hospital.

“Marc worked for Ron Stern and partners, playing a key role in the re-opening of the mill eight years ago,” says Hartery. “Marc will always be remembered for his positive spirit and eagerness to work together, which was evident in everything he did until his time of passing in 2018.”