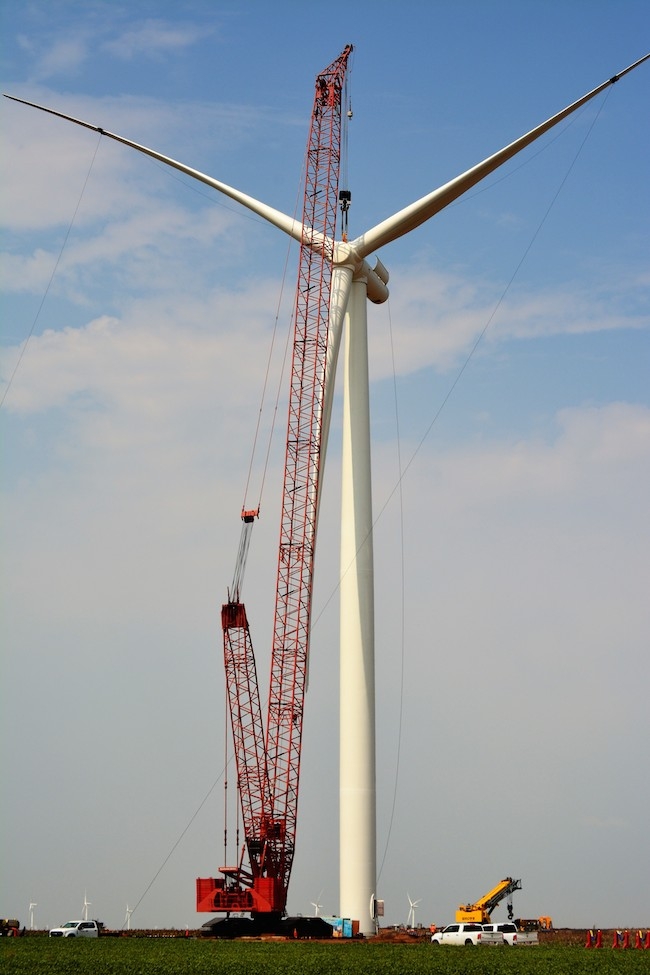 Oct. 17, 2017 – Kimberly-Clark has announced it will annually purchase about 1,000,000 megawatt hours of electricity generated by two new wind power projects in the United States, starting in 2018, to power its North American mills.

Currently under construction, the Rock Falls Wind project developed by EDF Renewables (pictured here) in northern Oklahoma will become operational by the end of the year, and the Santa Rita Wind Energy Center built by Invenergy in West Texas is expected to start up by the second quarter of 2018.

The longterm contracts involve the purchase of 120 MW (almost 80 per cent of the electricity generated) from Rock Falls and 125 MW (42 per cent of the electricity generated) from Santa Rita. Together, this represents about one-third of the electricity needs of Kimberly-Clark’s entire North American manufacturing operations. It will reduce the firm’s greenhouse gas (GHG) emissions by up to 550,000 metric tonnes every year, the equivalent of removing over 116,000 passenger vehicles from the road, enabling the company to surpass its GHG reduction goal four years earlier than anticipated.

“These agreements mark Kimberly-Clark’s first use of utility-scale renewable energy and are a step-change in our energy and climate strategy to reduce climate change impacts, improve operating efficiency and benefit cost savings,” said Lisa Morden, global head of sustainability at Kimberly-Clark, in a statement. “Adding wind-generated electricity to the energy mix will enable the company to achieve more than a 25 per cent reduction in GHG emissions in 2018, which is four years ahead of the original 2022 target to reduce absolute greenhouse gas emissions by 20 per cent from 2005 levels.”
According to Stewart Van Horn, director of global energy solutions at Kimberly-Clark, there will be no impact on the operation of his company’s mills from using wind-generated electricity, in terms of things like potential power fluctuations.

“These are virtual power purchase agreements, sometimes referred to as a contract for differences,” he explains. “Kimberly-Clark contracts with the wind farm operators to take a portion of the facilities’ generating capacity, the additional energy from these projects is added to the transmission grid, and Kimberly-Clark receives renewable energy credits to offset emissions from its manufacturing operations.”

Kimberly-Clark has also completed more than 350 other energy-conservation initiatives across its operations since 2015. More than 30 of its manufacturing facilities, for example, have adopted LEAN Energy Management.

He adds that Kimberly-Clark teams across the globe have found new, more efficient ways to generate power using biomass and cogeneration. Recent projects include the startup of a biomass boiler and cogeneration facility at the firm’s Sitio del Niño plant in El Salvador, and a biomass boiler at its Mogi das Cruzes plant in Brazil. In addition, in 2019, Kimberly-Clark will start up its seventh large-scale electricity cogeneration facility, with waste heat being recovered at all of these facilities and used for both the manufacturing process and plant heating.

All the new renewable energy projects and other energy initiatives will put the firm on track to reap savings in the multimillion dollar range by 2022. The recent wind power purchase agreements, for example, have the potential to provide cost benefits and also cost certainty over the 12 to 15 years the agreements are in place, says Van Horn.

“Power generation from renewable sources like wind is not affected by fluctuating costs for fuel such as natural gas,” he notes. “By locking in a price for electricity from a stable, renewable source, these wind power agreements will help reduce Kimberly-Clark’s exposure to future energy cost fluctuations and save money over the longterm. We are hopeful the increased use of renewable energy by Kimberly-Clark will provide a positive differentiation for us in the eyes of our customers and consumers.”

This article was originally published in the Fall 2017 issue of Pulp & Paper Canada.