There’s a giant, covered pond filled with microorganisms at the Slave Lake Pulp mill site. It’s man-made, and it’s massive, the size of three hockey rinks. This is a new addition to Slave Lake’s wastewater treatment system and the source of the methane that the mill converts to green electricity. 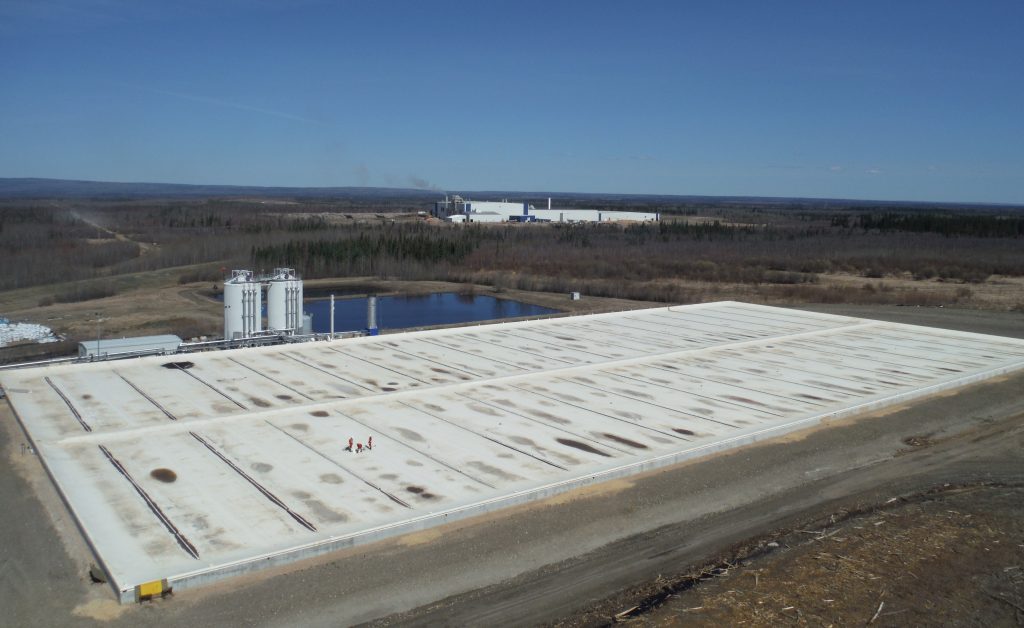 The expansive anaerobic digester is covered by a geomembrane equipped with sampling ports.

The low-rate anaerobic treatment system is believed to be the first in Canada for the pulp and paper sector.

The company decided to explore bio-methane for power generation and requested tenders in 2012. Shannon Fehr, engineering superintendent, says the bid process evoked a wide variety of technologies from around the world. Representatives of Slave Lake went on a trip to China and Thailand to see anaerobic technology in action. Closer to home, they viewed the ADI-Bulk Volume Fermenter (BVF®) reactor system in operation in Taber, Alta.

ADI Systems is a Canadian company, based in Fredericton, N.B. Senior process specialist Peter McCarthy says the selling points of the BVF system are its low need for operator attention, the fact that it doesn’t require granular sludge, and that it is more economical to purchase than high-rate systems. In this particular case, Slave Lake Pulp had sufficient space to install the large-footprint digester.

“We run very lean,” says Fehr. “We needed something that wasn’t going to be a big drain on our resources.”

High-rate digestion systems can be very time-consuming, she says. “We felt the operator input, for us, would be prohibitive.”

Another advantage of the BVF technology is that it doesn’t require a tank. The costs of building a tank in Alberta at that time were prohibitive, she recalls.

“So, from a cost perspective, BVF was a leader.”

Simple yet effective technology
In a technical paper co-authored by Fehr, McCarthy, Daniel Bertoldo of ADI Systems and Megan DiJulio of Slave Lake Pulp, Slave Lake Pulp Biomethanation with Power Generation Project, the authors describe the anaerobic process as it applies to Slave Lake: “In general, anaerobic digestion involves a series of steps in which microorganisms break down organic matter in the absence of oxygen….resulting in the production of biogas, a mixture primarily consisting of methane and carbon dioxide (with hydrogen sulfide and trace amounts of other gases). The high heating value of methane allows for the biogas energy to be recovered and offset fossil fuel consumption.”

Financing for this project was assisted by the Climate Change and Emissions Management Corporation (CCEMC), which provided $5 million and the EcoTrust Fund, which contributed $10 million. A further $25 million was contributed by West Fraser. In December 2015, Fehr reported that the project was under budget, but one year behind schedule because of some difficulties associated with building tanks for the scrubber system.

Now, $40 million and three-and-a-half years after the tenders began, the final piece of the system is in place. The biogas scrubbers were commissioned in the final days of 2015. They are among the world’s largest biological scrubbers, in terms of hydrogen sulfide loading.

In their technical paper, Fehr and McCarthy note that the BVF reactor is effective at consistently achieving high organic removal efficiency, yet is relatively simple. “The anaerobic reactor itself is an earthen basin with a concrete perimeter wall lined with a geotextile underlay and geomembrane liner….. piping evenly distributes incoming wastewater throughout the front-end of the reactor, where the majority of the biologically degradable organics are digested.”

Biogas generated in the system migrates to the reactor cover perimeter, where blowers pull gas through the biogas scrubbing system, boost the gas pressure and transmit the scrubbed biogas to the generators.

The process characteristics of the BVF reactor enhance process stability, and have an inherent ability to handle variations in hydraulic and organic loads. “This factor is important for Slave Lake Pulp, as the mill frequently alternates pulp brightness grades, resulting in swings in the wastewater’s COD concentrations from 5,000 to 19,000 mg/l,” say the authors.

“There’s been a learning curve for us regarding anaerobic digestion,” Fehr admits. Biological systems generally take a long time to commission, and the digester took months, she recalls.

Construction had to work around winter weather
Detailed design of the anaerobic digestion and biogas scrubbing systems began in February 2013. It was decided to perform the construction in two phases due to the large size of the reactor and the harsh winter conditions typical of northern Alberta.

The first construction phase extended from June to December of 2013. The objectives were to have the basin, liner and internal items installed, and to fill the reactor with water. An area 95 m by 185 m had to be stripped and excavated. The reactor liner and internal piping were installed by Geomembrane Technologies Inc. In November, the reactor was filled with effluent from Slave Lake Pulp’s conventional activated sludge (CAS) system, and warm effluent was circulated in the reactor over the winter to keep the liquid from freezing.

The second phase of construction began in April 2014. It involved the installation of the geomembrane reactor cover and completion of the biogas piping. When the reactor was warm enough, seed sludge was added, sourced from the City of Edmonton’s wastewater treatment plant and waste activated sludge (WAS) from Slave Lake Pulp’s treatment system. By September, the reactor was ready to accept wastewater from the mill.

Construction on the biogas scrubber system was completed in 2015.

The authors also note that anaerobic effluent quality has been consistent during the variations in incoming wastewater strength.

ADI Systems has previously installed several sequencing batch reactors for recycled paper mills in Canada. McCarthy says the his company’s BVF low-rate anaerobic digester could potentially be used for BCTMP mills and recycled-fibre mills. “The technology is good for high-COD streams,” says McCarthy, which may also include some select wastewater streams from kraft, dissolving pulp or other pulp and papermaking operations.

Slave Lake Pulp mill generates a high-strength wastewater stream which, prior to the biomethanation project, was treated in a CAS system.

This story orignally appeared in the Jan/Feb 2016 issue.