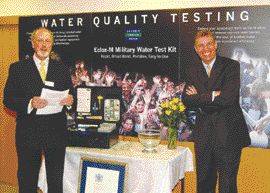 Helsinki, Finland–Stora Enso and Bosch have developed a packaging concept for pharmaceuticals. Called the PharmaPak SHR, the innovation has been labeled, “a small-hands resistant, senior-friendly and high-compliance packaging solution.” Consisting of an automatic cartoning machine, both the size and configuration of the inserts can be individually determined.

“The focus of the concept is the pharmaceutical industry, contract packers and clinical trial service providers, who will use the services of accredited converters and printers,” said Ismo Saarinen, director of pharmaceutical solutions at Stora Enso. Saarinen anticipates the greatest potential for customers will lie within the United States. “The United States has the highest stringent drug-safety regulations,” he confirmed. The United Kingdom and Western Europe are also good contenders for the product, he claims.

At the Johnson R&D Center, different equipment combinations and system components (such as rotary joints, stationary syphons, rotary syphons and Turbulator bars) are tested under the conditions of a particular customer’s operation in order to help maximize machine performance. System analysis and seal technology is also a major area of study for Johnson engineers.

Real-time simulations allow you to see the performance of recommended equipment before making an investment decision.

The Facility has a fully-instrumented control room with closed circuit video system for real time observation inside the test cylinders, as well as product development and performance test areas and conference room seating, with state-of-the-art equipment and closed circuit television for live viewing of testing.

ALEXANDRIA, VA — CCTI has released a CD version of its technical notebook. A compilation of uniform industry specifications relating to the manufacture, testing and use of composite cans, tubes and cores, the CD is organized into a notebook format. Included topics are recommended industry standards, standard testing procedures, guidelines (including the papermill core guidelines), technical committee reports, conversion tables, silicate information and glossaries of technical terms.

SEVERN TRENT GETS THE ROYAL TREATMENT

FORT WASHINGTON, PA — Severn Trent was awarded the Queen’s Award for Enterprise, the most prestigious award for business innovation. Presented by His Royal Highness The Duke of York, Severn Trent received the honor in recognition of its development of the Eclox Water Test Kit, designed to test for chemical contamination of water. Originally developed for the British Ministry of Defense, the kit is now being used by water utilities as a safeguard against terrorism as well.

ALPHARETTE, GA — Omya Industries has stated the lawsuit launched against it by Minerals Technologies is baseless. The company has communicated its intent to contest allegations of infringement and although it has yet to file a formal response to the complaint, it is investigating and evaluating all possible options available.

Omya has provided Mineral Technologies with information outlining its lack of infringement relating to acid-stabilized calcium carbonate and its use in manufacturing acidic paper.

D-NIP GETS ITS FIRST ORDERS

EAST HANOVER, NJ — Sensor Products has received an order for three units of its D-Nip nip profiling system. The real-time pressure mapping and nip profiling system manufacturer received the order from Metso Paper, whose maintenance technicians will use the tool to calibrate and align production machinery at pulp and paper plants.

Stora Enso Publication Paper has enlisted the services of Voith Paper Automation for an upgrade at its Kabel mill in Hagen. The upgrade of the control system of Coater 5 already in place will form the basis for a long-term partnership with the Kabel mill.

Included in the order is the replacement of the existing quality control system with the Voith OnQ quality control system. Coaters 3 & 4 for top-coat will be equipped with the ModuleCoat actuator system for coat weight cross directional control with 76 actuators each. A full service contract for 24 months including resident service with on-call service and uptime guarantee will ensure smooth operations.

The Kabel mill has an annual capacity of approximately 600,000 tons and is one of Stora Enso’s most effective production units.

DALLAS,TX — Kimberly-Clark has developed a new facial tissue product from the Kleenex brand designed to kill cold and flu-causing viruses. The tissue operates in a manner such that when moisture from a cough or sneeze hits the middle layer of the 3-ply tissue, 99.9% of cold and flue viruses will be killed in the material within 15 minutes. Scheduled for delivery this month, the Kleenex Anti-Viral tissue will be available in U.S. stores by early October. No date for Canadian commercial availability has been determined.

BRUSSELS — Sappi Fine Paper has launched ‘Life with Print’, a new program that promotes the efficiency and importance of print — advertising, direct mail, brochures and catalogues — in effective brand promotion.

As a result Sappi presents two ‘Life with Print’ brochures that highlight American and European examples of the value of print in the media mix. They aim to increase the understanding among advertisers and marketing professionals of the vital role print can play in building brands.

These publications also build on the Sappi Print Media Efficiency Award announced last year. The award, currently being judged as part of the Euro-Effie Awards, is based on demonstrating the efficiency of a European advertising or promotional campaign with particular emphasis on the integration of print media.

HELSINKI, FINLAND — Three years ago, UPM-Kymmene started up a deinking plant Austria GmbH in Steyrermhl. Now the plant has contracted Voith in an effort to improve its capacity. Through an extension of the flotation and screening systems, capacity of the stock preparation systems in lines 3 and 4 will increase to a total of 830t/24h finished stock. Start-up is expected in January 2005.

Rauma Harbour, Finland — Pesmel has developed a new concept designed to ensure the seamless mill-to-harbor delivery of paper reels. The system for unloading paper reels from railway wagons and transferring them to sea cassettes was purchased by Rauma Stevedoring, operator of Rauma Harbor. “We handle over 30% of all paper consignments from Finland to export markets and this new system ensures the reliable, smooth and flexible handling of paper reels,” confirmed Markku Koshinen, production manager at Rauma Stevedoring.