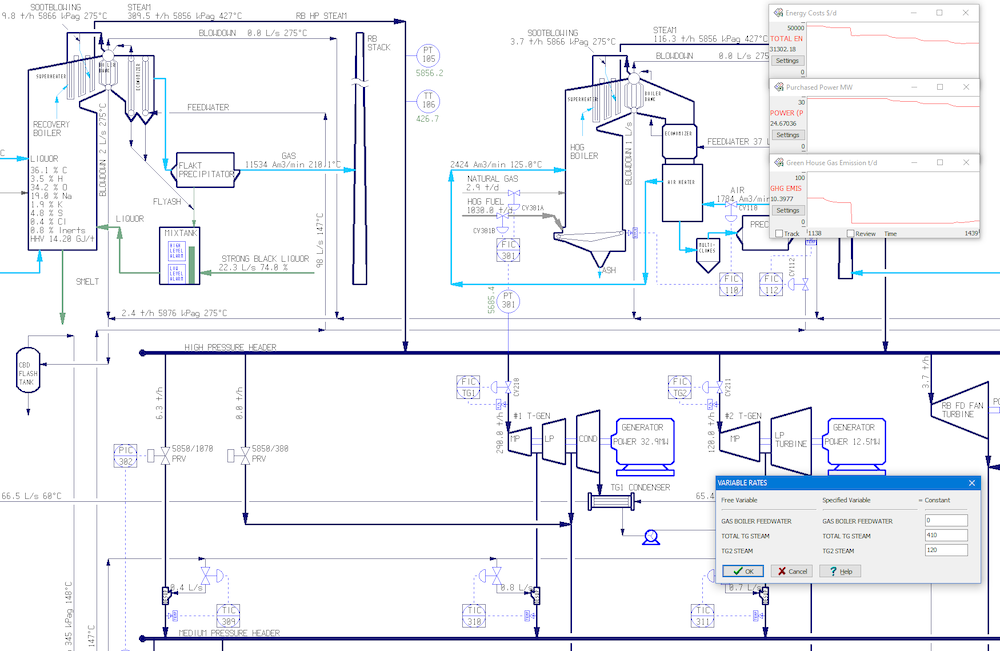 Pulp mills are responsible for about 30 per cent of industrial energy use in Canada, so monitoring usage and finding new opportunities for efficiency is a perennial goal for operators and management. But do you really know how much energy your pulp-making process is generating – or losing – in a given year?

Chances are, you don’t know the whole story, says Larry Wasik, president of Aurel Systems, a software company that has developed a simulation tool to help pulp and paper mills understand processes such as energy or product tracking, and water management.

Most of a pulp mill’s energy is produced by burning black liquor, hog fuel, natural gas, or fuel oil (such as bunker C) to produce steam at high pressure. The steam pressure is then reduced for use in mill processes, heating systems, or to generate electricity for internal use or to sell back to the grid.

But, according to Wasik, understanding of energy flows is often limited due to errors in measurement caused by sensor drift, inadequate sensors, non-linearity affecting calibration, lack of access for repairs and the impact of the corrosive environment.

“I have seen an entire steam system with continuous steam oscillations of 15,000 kg/h – yet those oscillations don’t even show up on trend charts on the data historian. How can you make a decision based on information that’s that inaccurate? How can you best know where to go to next if you do not know where you are starting from?”

“For those trying optimization or trying to make decisions, they’re compromised already. They have no idea where they’re starting from. It’s like, say you want to go to Halifax – well, if you’re starting in Saint John or you’re starting in Vancouver, the instructions on how to get there are going to be a lot different.”

A simulator for accurate measurement

Wasik has been developing simulators since the early 1970s and, over the past 24 years, worked with the Aurel Systems team to create CADSIM® Plus, a chemical process simulation software that can perform mass and energy balances and simulate dynamic conditions.

Recently, over nine person-years of development effort has gone into what the company calls “dynamic data reconciliation” (DDR) to track chemical processes 24/7 as a “digital twin” (a virtual representation of a physical process).

DDR pulls information from a plant’s DCS and uses simulation to balance processes, such as steam and fuel flows, before feeding that information and key performance indicators back into the plant historian at one-minute intervals.

Operators receive up-to-date reports to compare usage. The five worst measurements are identified each day and reported to instrument mechanics for potential recalibration or repair. Having a first-principles understanding of where the current process is what enables truly accurate real-time optimization and data mining.

CADSIM Plus uses a first-principles simulation model, meaning it’s based on mass and energy balances.

The DDR technology will eventually be applicable to many industries, but Wasik says Aurel is currently targeting kraft mills and their power islands – including recovery boilers, hog boilers, power boilers, pressure reducing valves, turbo generators, etc. – after hearing feedback from energy engineers at many mills that they do not have a clear idea how to run the mill’s generators or what is the best way to perform a steam pressure letdown.

The power island “is one that everybody seems to have as a problem and they don’t really understand it because it is very complex,” Wasik says. “On top of that, steam flows are notorious for being wrong. The tests we’ve done [with a power island energy model] indicate that for a typically sized mill, you could be saving between $1 to $5 million a year by understanding how to find the operating sweet spot.”

Aurel Systems first implemented its DDR software on the energy system at Paper Excellence’s pulp and paper mill in Crofton, B.C. in 2006, and then in 2008 to track grade changes at Rayonier Advanced Materials’ specialty cellulose mill in Témiscaming, Quebec.

You can’t make any more steam out of the boiler than the water going into the boiler. And the uses of the steam should add up to what the boilers make.

Prior to installation, Aurel had been doing data reconciliation at the Crofton mill with another software that used a matrix method. Evaporators would go down, for example, leaving the flows at zero.

Multiple zeroes in a matrix lead to computation issues, so the data calculations would fail every time part of the process went down. Since installing CADSIM Plus, the Crofton mill has not experienced one data reconciliation calculation failure.

Aurel is now working on a new implementation for the power island energy system at another B.C. kraft pulp mill that combines the CADSIM Plus DDR of versions past with a new feature – real-time optimization.

CADSIM Plus uses a first-principles simulation model, meaning it’s based on mass and energy balances and physical transients.

“You can’t make any more steam out of the boiler than the water going into the boiler. And the uses of the steam should add up to what the boilers make. So we reconcile all that data, doing thousands of simulation runs each minute, giving a best fit of the model through measured data points. In doing so, we correct the measurements,” Wasik says.

Raw data measurements are obtained from the mill historian and balanced results and KPIs are returned to it.

The real-time optimization software starts from current process operation and finds the best performance conditions based on a set of economic goals. It iterates the “digital twin” model and tests thousands of different scenarios, updating information to the operator every 10 minutes.

The optimizer provides operators the resulting best suggestion on what action to take based on changes from where the process is at – and how much money that action could save per year. Engineers can also use the model to test a process change themselves in order to be comfortable with the suggestions being made to operators.

“At different production rates, the answers to how much each turbine should be used, or how much steam you put through the pressure reducing valves, and possibly even the fuel make-up of what you are burning, totally change depending on your production rate.

“Operators will often keep the process at status quo or at a conservative level without changing things,” says Wasik. “However, they’re not getting to [that] sweet spot where they could be saving.”

Wasik says the machine learning developed for the CADSIM Plus real-time optimization process isn’t so much “artificial intelligence,” because it’s based on real information. And it works well because the true process operating state is known after data reconciliation.

“There’s a saying in the industry that 80 per cent of advanced controls are turned off within two years. And the reason is they don’t have a good model instantiated with the current process model,” he says. “We’re putting in the rigour of forcing a balance and finding out where the process is. We think that for advanced process control, this will be a game changer.”