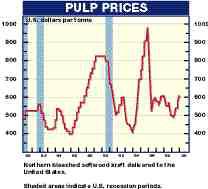 The last decade was a period of relatively slow world economic growth (especially in the major G7 industrial countries) — constraining prices for many commodity-grade forest products and contributing to weak shareholder returns. However, the opening years of the new millennium promise a period of stronger, more sustained growth — boding well for pulp and paper prices. Slower capacity expansion in international “market” pulp and in North American printing and writing paper grades (P&W) over the next two to three years — as producers seek a higher return on existing assets — also point to tighter supply/demand conditions.

Pulp prices have already rallied sharply this year — with northern bleached softwood kraft rising from a low of US$490 per tonne (t) in the United States to US$610 in November (24%). Canadian and Nordic producers have announced a further price increase of US$30 to $40/t for January. Norscan producer inventories fell to only 20 days’ supply on a seasonally adjusted basis in October — close to the 18 days of February 1995 prior to the price run-up to US$985 later that year.

On the supply side, global pulp capacity expansion has come to a virtual halt this year.

Indonesian producers have taken hardwood pulp supplies off the market to build stocks for new paper machines in Indonesia and China, tightening supplies in Europe and the Far East. On the demand side, shipments have also been quite robust. Uncoated freesheet paper consumption in the United States and Europe is closing the 1990s on a fairly strong note. Robust US personal computer sales — bolstered by falling computer prices — and the growing use of E-mail are boosting US demand for cut-size printing paper. Document reproduction ahead of any Y2K problems has probably also pushed up fourth-quarter demand. Asian consumption of P&W papers is expected to surpass pre-crisis 1997 levels by late 1999, largely due to strong demand in China. South Korean consumption of P&W papers will jump by about 30% in 1999, but will remain 15% below the 1997 level.

Demand for paper and pulp will probably slow in the United States and Europe in early 2000, following a fourth-quarter millennium-related surge in advertising and publishing. The stocking of pulp for new paper machines in the Far East may also be largely over. While these developments will likely stall pulp prices, shipments and prices should resume an upward track in the second half of the year. Global inflation is likely to stay fairly low in the new millennium and it will be important for pulp producers to lift prices gradually to maintain the competitiveness of paper and print media in the Internet era.

The US economy is expected to slow in 2000 under the weight of slightly higher interest rates and less pent-up demand for housing and autos. However, growth should still be a solid 3.2% compared with this year’s robust 3.9%. National output expanded at an exceptional 5.5% annualized rate in the third quarter. Inflation will edge up, but the increase in interest rates needed to contain consumer price inflation — currently running at 2.6% year-over-year — should be limited. Very competitive international markets and further technology-driven U.S. productivity gains — linked partly to booming investment in telecommunications equipment — will continue to offset part of the impact from higher oil prices and a “fully-employed” labor force. The US unemployment rate at 4.1% in October was the lowest in almost 30 years and hourly wage gains were still subdued at 3.6% year-over-year.

East Asia is also recovering at a faster-than-expected pace — boosted by last year’s easing of monetary and fiscal policy restraint. South Korea could well be the fastest growing economy in the world in 1999 — a welcome development for several North American-owned newsprint operations. Real GDP (gross domestic product) in South Korea should expand by at least 9% in 1999, after almost a 6% contraction last year. A strong recovery in global demand for electronics and a competitive exchange rate (especially against the yen) have boosted the export sector. Retail spending has been revitalized by a pick-up in employment and rebounding consumer confidence. With foreign debt declining and overseas assets increasing, Korea has swung into a net creditor position — a remarkable turnaround for a country that was facing a potential major debt servicing crisis less than two years ago.

In Japan, a gradual economic upturn is underway alongside massive doses of public spending and rising exports to the rest of East Asia. However, the pace of recovery will likely stay subdued. The renewed strengthening in the yen against the US dollar works against a broad-based export recovery. Near record high unemployment (4.9%) — partly the result of massive downsizing in manufacturing and service industries — continues to limit the pick-up in consumer spending. On a more positive note, massive consolidation and restructuring of the Japanese financial sector are underway — developments that augur well for the medium-term.